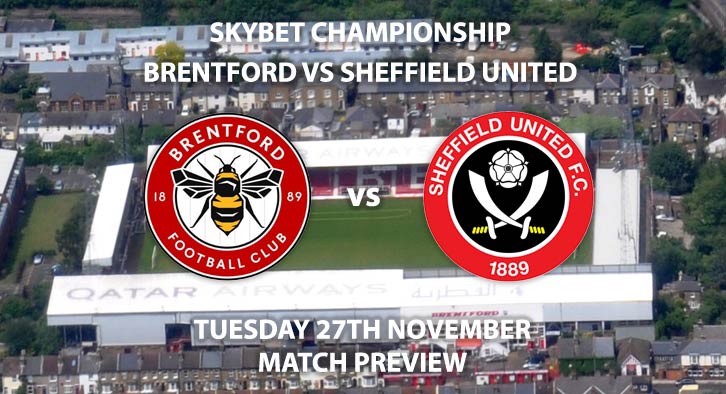 Brentford vs Sheffield United: the visitors will be hoping to close the gap on the automatic promotion places when they take on Brentford at Griffin Park.

The Blades dropped two vital points at the weekend as they drew 2-2 at Rotherham United. Jamie Proctor snatched the Millers a deserved point with a 92nd– minute strike, despite United only regaining the lead in the 86th-minute. In truth, United were outplayed by their Yorkshire neighbours, with manager Chris Wilder admitting they were “off the pace” after the game.

The Blades have a tough run of games and have taken just two points from two derbies that they really should have won. They take on Leeds United, West Brom and Derby County in their next five games, which puts the onus on a positive result against the Bees. Mark Duffy’s recent performances have given cause for optimism. Despite being 33, Duffy seems to be producing his best form at Championship level. Whilst he only has three goals this season, he has an 85% pass accuracy, producing 1.4 key passes per game.

Brentford suffered another at the weekend, going down 2-1 against Middlesbrough. They have won just once in 12 matches in all competitions, which has undone their good work from earlier in the campaign. Thomas Frank has just one win in charge of the Bees; if they want to reach the play-offs that form will need to improve. That drop in form has correlated with Neil Maupay’s lack of goals. After starting the season with eight goals in six games the Frenchman has four goals in his last 11. Whilst that is hardly a goal drought, it underlines how he has suffered along with the team.

Stephen Martin is the referee for this game. The Englishman has officiated six games in the second tier this season. In that time, he has accumulated an average booking points total of 35.8. Therefore, I would advise a maximum 50+ total points for this fixture.

Sheffield United will be disappointed with their performance at the weekend, which usually follows a response. Wilder will have his team firing on all cylinders and that means they’ll probably come away with all three points.

Brentford vs Sheffield United will be televised on Sky Sports Football HD and kicks off at 19:45.

Odds and markets last updated on Tuesday 27th November @17:07 GMT. Keep checking back to see if there’s any updates to markets – the time stamp in the previous sentence for when we update tips on this page will be updated.