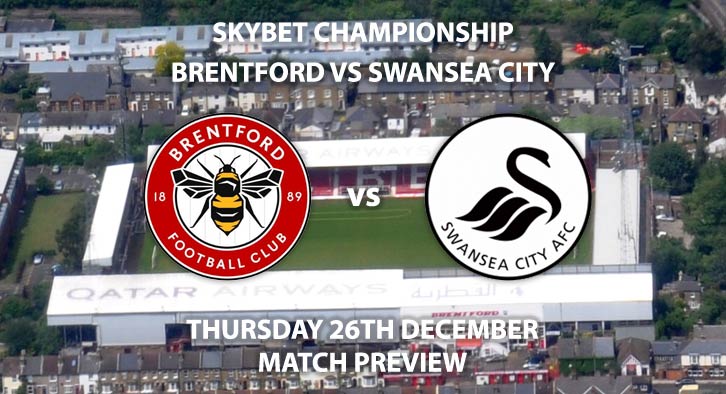 Brentford return to Championship action on Boxing Day when they welcome Swansea City to Griffin Park.

Brentford sit sixth, meanwhile Swansea occupy seventh, with a point separating the two. Both sides will be wanting to land the knockout blow on Boxing Day.

The Bee’s will be hoping to build on their positive point away at leaders West Bromwich Albion last time round, a match in which they dominated for large parts and enjoyed more of the ball.

Thomas Frank’s side are in fine form, losing once in their last five.

Swansea too are on a fine run of form and have lost one in their last four. Andre Ayew’s late winner against Luton extended the Swans’ unbeaten run, and they will be hoping it continues over the Christmas period.

Brentford were 3-0 winners the last time these two met, a win which ended a phenomenal Swansea winning run in this fixture. Before Brentford’s win just over two months ago, Swansea were unbeaten in the last nine meetings, winning eight, a run which stretched back to March 2006.

A win for either side on Thursday will see them reach forty points, and if other results go in their favour, it could see them go as high as third.

Steve Cooper’s side have lost once on the road in the Championship this season, and SkyBet are offering odds of an away win at 17/4.

The referee for this fixture is Andy Woolmer. The 53-year old has taken charge of thirteen Championship matches this season, accumulating a total of thirty-eight yellow cards, and one red card. This considered I would recommend a minimum of 20+ booking points for this fixture. Woolmer has taken charge of Brentford twice so far this season; their 0-0 draw to Stoke in September where he awarded three yellow cards, and in their 1-0 defeat to QPR in October, where he also awarded three yellow cards. Woolmer has overseen a match involving Swansea once, their 1-1 draw with Barnsley, where two yellow cards were awarded.

This match will be shown live on Sky Sports Football, with kick-off scheduled to take place at 15:00 GMT on Boxing Day.