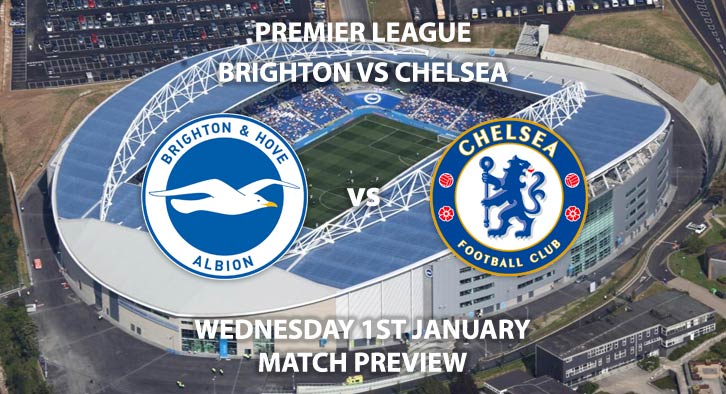 The hosts are hoping to keep the relegation zone in arm’s length as they are currently 14th, five points from the drop as it stands. Meanwhile, Chelsea are looking to cement their place in the top four places as they aim for more consistency in Frank Lampard’s debut season at Stamford Bridge.

Brighton and Hove Albion are priced at 5/2 to win the match by SkyBet and start the new decade off with a shock victory. The Seagulls have played some good stuff under Graham Potter with the aim of midtable mediocrity for this campaign. They are also struggling for consistency during the hectic December schedule but pulled off a convincing 2-0 victory over Bournemouth on the 28th.

Striker Neal Maupay is proving he was worth the risk when they signed him in January and has seven goals this term. He is priced at 7/5 to score anytime.

Chelsea are priced at 1/1 to win the match and build on from their dramatic winner in the London derby last time out. The Blues beat Arsenal with two late goals a couple days ago and will hope to continue totting up points heading into the new year. Lampard’s men are struggling for form at times due to their lack of topflight experience; with a record of two wins and two losses in their last four.

Striker Tammy Abraham is doing a great job spearheading the club’s attack and scored the last gasp winner at the Emirates Stadium. It was his 12th goal of the season and he’s priced at 1/1 to score anytime at the AMEX Stadium.

The referee for this match will be Stuart Attwell. The official could have his work cut out for him on Wednesday, as the last time these two met, 50 booking points were brandished.

– This could be a tight one, but the visitors showcased great character in their previous outing.