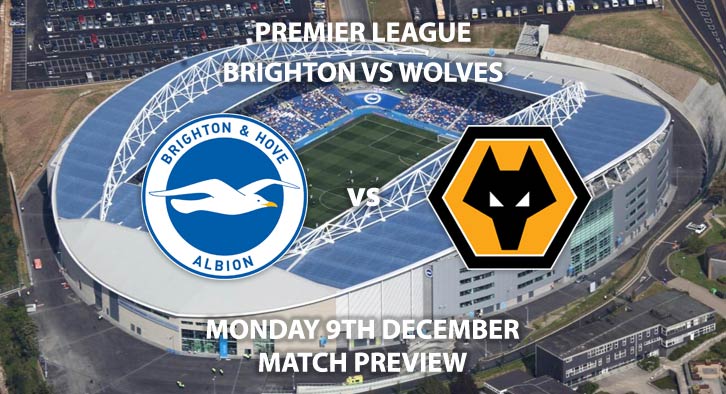 Brighton and Hove Albion return to the Amex on Sunday afternoon as they host Wolves in the Premier League.

Graham Potter’s side will be looking to build on their impressive midweek win at the Emirates, where they defeated managerless Arsenal 2-1. Albion have shown tremendous promise in their most recent fixtures, and prior to the win over Arsenal, were unfortunate to come away with nothing from Anfield; a game which they dominated for large periods. There’s a real feeling of positivity surrounding Graham Potters side currently.

Wolves similarly were victorious in midweek following their 2-0 triumph over West Ham United at Molineux. The win added more pressure on Hammers boss Mauricio Pellegrini, who has led his side to only one victory in their last nine.

Wednesdays win for Brighton was much needed. Despite their promise over recent weeks, they had very little to show for it. Brighton had lost three of their last four in the league, with their last victory coming at the end of October. Potters side currently sit 13th in the league.

Nuno Espirito Santo’s Wolves side however have gone somewhat under the radar in recent weeks, and their form has seen them reach 5th in the league. Wolves are unbeaten in their last ten in the league (winning five and drawing five). Their last league defeat came at home to Chelsea in September.

Last seasons exploits between these two sides saw Brighton win at the Amex, before a stalemate at Molineux. Brighton are unbeaten in their last four encounters with Wolves, winning three. Brighton completed a league double over Wolves in the 2016/17 season, back when this was Championship fixture. Wolves’ last win in the fixture came in January 2016, where they won 1-0 at the Amex.

The man in charge for this game is Jonathan Moss. The 49-year old has taken charge of twelve top-flight matches so far this season, accumulating a total of forty-two yellow cards, and two red cards. This considered, I would suggest a minimum of 30+ booking points for this clash. Moss took charge of Wolves’ 1-1 draw with Manchester United where he awarded four yellow cards, and has overseen two Brighton matches, their 4-0 defeat to Manchester City where four yellow cards were awarded, and their 3-0 win over Spurs, where he awarded three yellow cards.

This match will be shown live on Sky Sports Premier League, with kick-off scheduled for 16:30 GMT on Sunday afternoon.