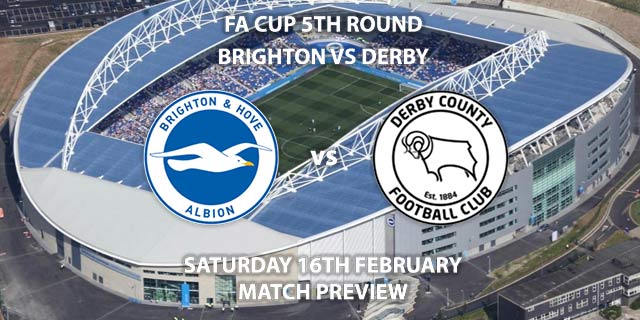 Brighton vs Derby: Brighton will be hoping to end a poor run of form when they host Frank Lampard’s Derby County to the Amex Stadium.

Chris Hughton’s men were beaten 3-1 by Burnley on Saturday night. That result dragged the Seagulls back into the relegation dogfight. Although they sit 14th in the table, Brighton are just three points ahead of 18th-placed Southampton. A run in the FA Cup has proven to be a welcome distraction, having beaten Bournemouth and West Brom away from home. Those two victories are Brighton’s only wins in their last eight games, which is a run they need to address. Goals have been their main problem, they’ve only scored six times in their last seven games. Glenn Murray’s strikes have dried up, but there is nobody else stepping up to help him. The Englishman did score a brace in the last round, however.

Derby beat Accrington Stanley in the last round of the cup but did Southampton in round three. It’s another away trip for Lampard’s men, who will be hoping to build on a 2-0 win at the weekend. The Rams sit seventh in the table, just behind Bristol City who occupy the final play-off position. Martyn Waghorn grabbed a brace at the weekend, playing in a more central role. With Jack Marriott missing with an ankle injury, he could be the man to fire Derby into the last eight. The former Ipswich striker also scored the winner in the last round at Accrington.

David Coote is the referee for this fixture. The Englishman has officiated 4 second-tier matches this season. In that time, he has accumulated an average booking points total of 31.4. Therefore, I would advise a maximum of 60+ total points for this fixture.

Brighton aren’t in the best of form and won’t be relishing this fixture. Derby are renowned for turning up against the ‘bigger’ sides. Therefore, I’m going to plump for a cup upset and back the Rams for a spot in the quarter-finals.

Brighton and Hove Albion vs Derby County will be televised live in the UK on BT Sport 2 with kick off at 12:30 PM GMT.