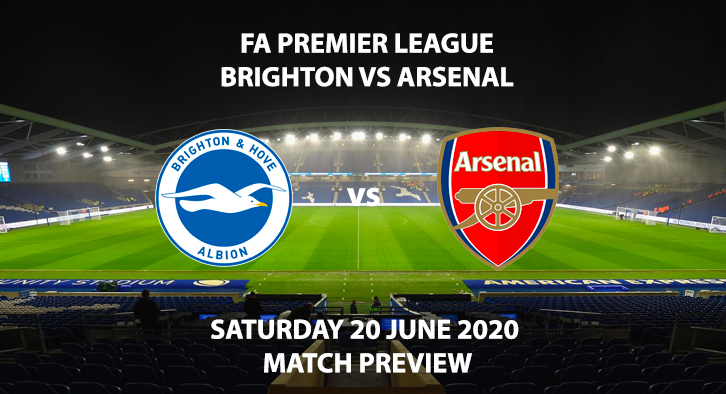 Brighton return to the Amex Stadium this weekend as they host Arsenal in the Premier League on Saturday afternoon.

To say Brighton need a Premier League win is an understatement. Graham Potter’s side are yet to win in the league this year, a winless run which consists of ten matches in all competitions. The seagulls currently sit 15th in the league, two points above the relegation zone.

Before the league’s stoppage Arsenal were unbeaten in their last nine, and yet to lose in the Premier League in 2020.

However, their return to Premier League action on Wednesday night was a disappointment, and if you’re David Luiz, it was a disaster. Mikel Arteta’s side were beaten 3-0 by the Champions, and Luiz’s contribution was a car crash to say the least.  In the 25 minutes that the Brazilian was on the field he managed to gift City the lead, concede a penalty, and get himself sent off.

Brighton shocked the Gunners back in December with a 2-1 win at the Emirates, their first win over Arsenal since 2017, and only their second in over 40 years. Arsenal’s recent form against the Seagulls is poor; they have failed to win in each of their last four encounters against this weekend’s opposition.

In eight of the last nine meetings in this fixture BTTS has landed. SkyBet are offering odds of 4/6 for both teams to find the back of the net on Saturday afternoon.

Pierre-Emerick Aubameyang has scored in three of his last four appearances against Brighton and is priced at 23/20 to make it four in five this weekend on SkyBet.

The referee for this clash is Martin Atkinson. The 49-year old has taken charge of 25 Premier League matches this season, accumulating a total of 72 yellow cards and 3 red cards.

Arsenal’s Sokratis Papastathopolous has been yellow carded in his last two consecutive appearances against Brighton and is priced at 21/20 to be carded in this one.

Brighton vs Arsenal will be televised live on BT Sport 1/Ultimate, with kick-off scheduled for 15:00 BST on Saturday afternoon.