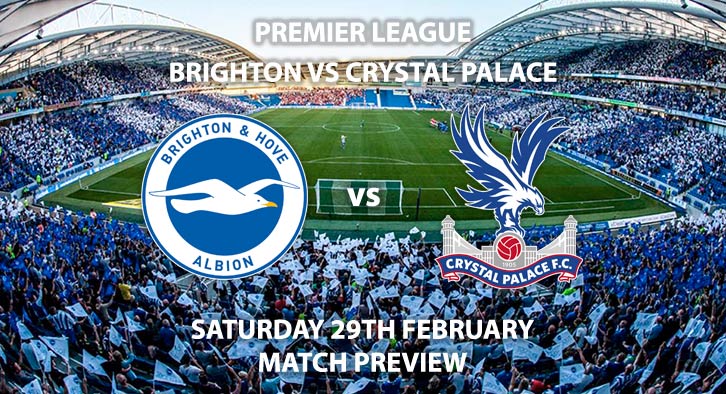 The Seagulls enter this match in terrible form without a victory in their last eight matches across all competitions. Graham Potter’s side are slipping closer to the relegation zone. Meanwhile, Crystal Palace are five points ahead of them and will hope to build on their 1-0 victory last time out.

Brighton and Hove Albion are priced 21/20 by SkyBet to win this match and turn their torrid form. The hosts are experiencing their worst form of the season and have been slow starters in recent weeks. They have conceded the first goal in their last four matches. They are also without a victory in their last four home matches. Much improvement needed.

In attack, Neal Maupay has been their main source of goals with eight goals this term. He is priced at 7/4 to score anytime.

Crystal Palace are priced at 29/10 to claim an away victory and pile on the misery for the hosts. The Eagles have been rather average this season, not pulling too many punches and going under the radar a lot of the time. However, they are also in pretty poor form with just two Premier League wins from their last nine matches.

In attack, Jordan Ayew has shown flashes of brilliance and has six goals to his name in the league. He is priced at 14/5 to score anytime.

The referee for this match will be Martin Atkinson. The official has been one of the more lenient in the topflight this season with an average of 33 booking points from his 22 Premier League matches.

Brighton vs Crystal Palace will be televised in the UK on BT Sport 1 HD and kicks off at 12:30.

– Neither team is showing too much quality and it’s a tough one to call.