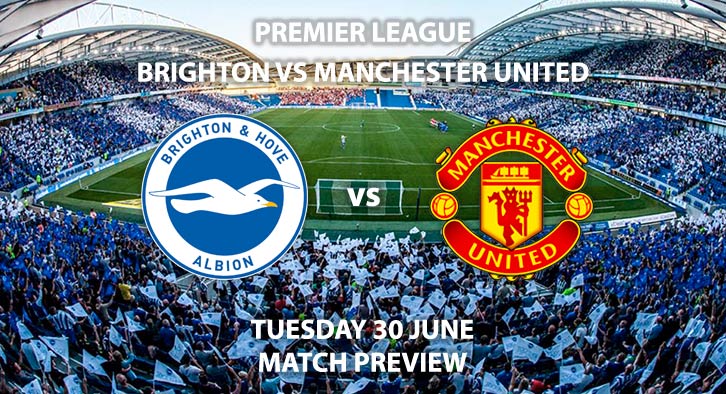 Brighton return to the Amex Stadium when they host Manchester United in the Premier League on Tuesday evening.

Brighton have been terrific since the Premier Leagues resumption and have distanced themselves from the relegation zone. Graham Potters’ side beat Arsenal before drawing with Leicester in their most recent encounter.

Manchester United returned to winning ways in the league with a 3-0 triumph over Sheffield United last time round. Anthony Martial struck a fantastic hat-trick, and became the first player to do so since Sir Alex Ferguson left the club over 7 years ago. Ole Gunnar Solskjaer’s side are unbeaten in seven Premier League matches.

United were 3-1 winners in the reverse fixture back in November and are priced at 3/4 on SkyBet to claim all three points. Brighton however have had the better record at home against United and have won both of their encounters on home turf since their return to the Premier League.

In this fixture BTTS has landed in each of the last three Premier League encounters. Furthermore, there has not been a draw in a game between these two sides eight meetings, a 28-year time frame.

The referee for this clash is Andre Marriner. The 49- year old has overseen 18 Premier League matches this season, accumulating 47 yellow cards and 2 red cards. November’s meeting between these two sides produced 7 yellow cards.

Marcus Rashford has scored in his last two Premier League appearances against Brighton. SkyBet are offering odds of 6/4 for the 22-year old to make it three from three and add to his 14 league goals this season.

In Brighton’s last four Premier League encounters, there has been a minimum of 30+ booking points. Over 2 cards for Brighton is priced at 3/1 on SkyBet.

This match will be shown live on Sky Sports Main Event/Premier League & Pick TV, with kick-off scheduled for 20:15 on Tuesday evening.