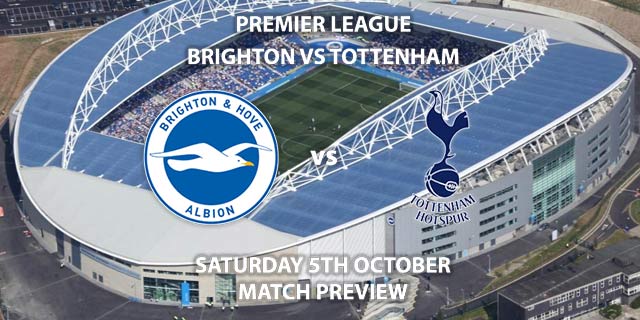 Tottenham Hotspur return to Premier League action this weekend as they travel to Brighton and Hove Albion on Saturday lunchtime.

Mauricio Pochettino’s side will be hoping there will be no lasting damage from their Champions League midweek mauling at the hands of Bayern Munich. Tottenham were defeated 7-2 on home soil on Matchday two of the Champions’ League group stage, the biggest ever margin of defeat by an English team at home in any European competition.

Graham Potter’s Brighton side are yet to taste victory since their opening day triumph over Watford. The Seagulls are without a league win in their last six league matches, and in that time have also been knocked out of the Carabao Cup, at the hands of Aston Villa.

Spurs currently sit 6th in the Premier League standings and claimed a much-needed win in the last round of fixtures, where they defeated Southampton 2-1. Inconsistency has been Spurs’ Achilles heel so far this season. They followed up the gritty, spirited 2-2 draw away to last seasons Champions Manchester city with a home defeat to Newcastle, and have failed to win any of their two CL group games.

Despite Spurs’ inconsistencies there has been one constant throughout, and that has been Harry Kane’s goalscoring return. Kane’s goal on Tuesday night means that the Englishman has scored eleven goals in his last eleven matches for club and country, which is quite the return. Kane has netted three times already this season and is priced at 14/5 on SkyBet to score first. Additionally, Harry Kane netted in this fixture last season.

Recent form between these two sides suggests Tottenham are heavy favourites to grab all three points. Spurs are unbeaten in their last six matches against Brighton, and the unbeaten run stretches way back to April 1983.

The referee for Saturday lunchtime’s encounter is Jonathan Moss. The 48-year old had taken charge of five Premier League matches already this season and has awarded 21 yellow cards and two red cards; an average of just over four yellow card per match. This considered, I would recommend a minimum of 30+ booking points for this fixture. Moss has yet to take charge of Spurs this season but did officiate Brighton’s 4-0 away defeat to Manchester City, where he awarded two yellow cards.

This match will be shown live on BT Sport 1 with kick off scheduled to take place at 12:30 BST on Saturday lunchtime.