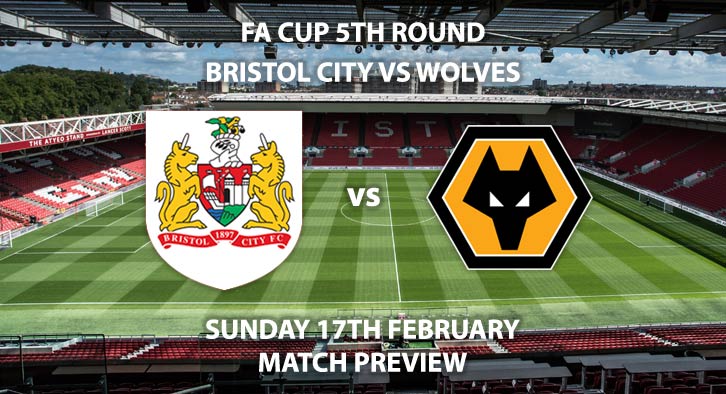 The FA Cup fifth round is upon us with plenty of clubs outside the ‘big six’ still hopeful of pulling off a dream. Two of those teams meet this Sunday as Bristol City host Premier League Wolves.

The home side beat fellow Championship side Bolton Wonderers 2-1 in the last round. Wolves needed a replay against Shrewsbury to settle the tie. They won the replay 3-2.

Bristol City are priced at 18/5 to win the match by SkyBet – high odds considering their recent league form. The home side are in red hot form with 9 wins on the bounce in all competitions. They have given their crowd a lot of cheering to do with six home wins in a row, conceding just three times. Famara Diedhiou has been the main man in attack this season. The striker has nine league goals and is 13/5 to score anytime.

Recent meetings do not go in the home sides favour. They have won just once against Wolves in their last five encounters. All of those matches have seen over 2.5 goals. You can get odds of 11/10 for over 2.5 goals.

Wolves are priced at 5/6 to win the match and progress to the quarter finals. Much like their opponents, Wolves are in good form and are unbeaten in six matches in all competitions. Loanee striker Raul Jiminez has been a great acquisition and could be the difference this Sunday. The Mexican has 9 league goals and 5 assists this season. He is 6/4 to score anytime.

The last time these two met, the away side won 2-1. SkyBet are offering 8/1 for the score line to repeat itself.

The referee for this match will be Martin Atkinson. The official has averaged 33.9 booking points in his 14 Premier League matches this season, however which lots at stake over 90 minutes it could be a feisty encounter.

Bristol City vs Wolves will be televised on BT Sport 2 and kicks off at 13:00.

– Both sides are in good form and home advantage will help Bristol deal with the Premier League side.