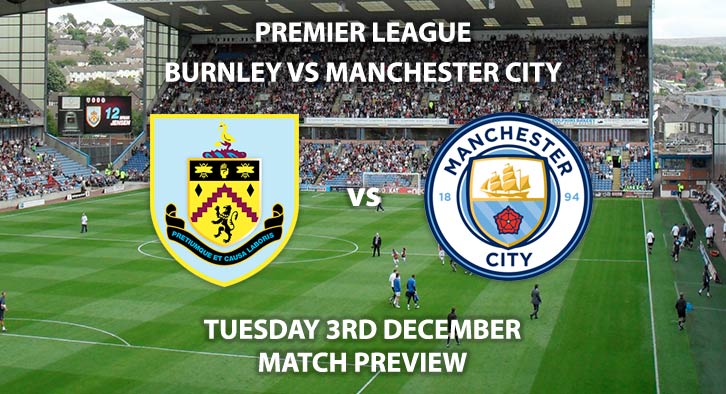 Manchester City look to return to winning ways in the Premier League as they travel to Turf Moor to face Burnley on Tuesday night.

Pep Guardiola’s side were held 2-2 at St James’ Park thanks to Jonjo Shelvey’s late leveller at the weekend, a result which left City eight points behind leaders Liverpool, but that margin was soon extended following Jurgen Klopp’s sides win against Brighton. City now train the Reds by eleven points in the league.

Burnley themselves were without a win in their most recent Premier League encounter. The Clarets were defeated 2-0 at home to Crystal Palace, their third home league defeat of the season. Sean Dyche’s side have lost six of their opening fourteen league outings so far this.

If the recent form between these two sides is anything to go by, then there’s only one likely outcome. City boast an incredible record against Tuesday nights opponents and have lost once in their last twenty-two against Burnley. Burnley’s last win over the Citizens was back in 201, where George Boyd fired home a late winner.

The referee for this encounter is Jonathan Moss. The 49-year old has taken charge of ten matches this season in the Premier League, accumulating a total of forty yellow cards, and two red cards in these fixtures. This considered, I would recommend a minimum of 30+ booking points for this clash. Moss has taken charge of matches involving both sides so far this campaign. He oversaw City’s 2-0 victory over Brighton where he awarded two yellow cards, and Burnley’s 2-1 away defeat to Leicester, where he awarded three yellow cards.

This match will be shown live on new Premier League broadcasters Amazon Prime, with kick-off scheduled to take place at 20:15 GMT.