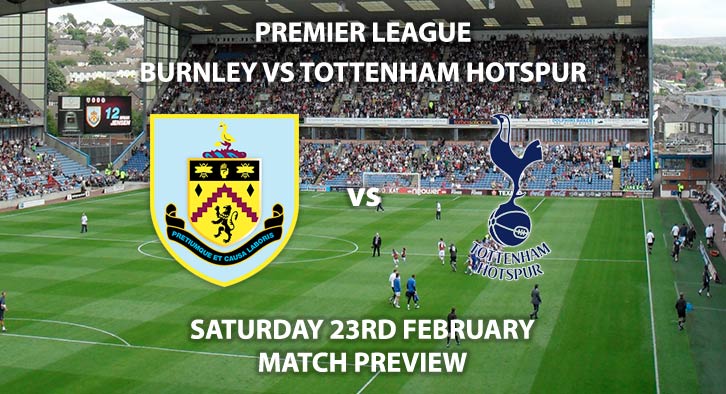 Burnley vs Tottenham Hotspur: Tottenham will be looking to close the gap on the top two when they visit relegation-threatened Burnley in the Saturday lunch-time game.

Spurs enjoyed a refreshing ten-day break after beating Borussia Dortmund 3-0 last Wednesday. Tottenham produced one of their best performances of the season against their German counterparts, despite being without several key men. Harry Kane is now back in training having missed the last seven games, although this game will probably come too soon for him. Heung-Min Son has been the man carrying the burden of scoring goals, to great effect. The 26-year-old has 16 goals this season, including 11 goals in his last 12 games. Spurs face Chelsea, Arsenal and Dortmund in the space of a week after this fixture. A run of games that will define their season. Therefore, they’ll want to go into that game in the best possible shape – with three points on Saturday.

Burnley’s recent upturn in form has seen them pull away from relegation danger. Sean Dyche’s side are still amongst the thick of things but are now 15th, three points clear of danger. Their 3-1 win over Brighton last time out was one of their best performance this season. Chris Wood grabbed a brace in that game, the striker’s third in as many games. Burnley are unbeaten in their last three home games, winning two of them. Saturday’s match against Tottenham will be a tough test for the Clarets, but given their recent form, they’ll feel capable of getting something from the game.

Mike Dean is the referee for this fixture. The Englishman has officiated nine top-flight matches this campaign. In that time, he has accumulated an average booking points total of 50.4. As a result, I would recommend a maximum of 70+ total points, for this fixture. Should Dean show a red card, it will be his 100th in the Premier League.

This will be a much tougher game than some might expect for Spurs. They are in superb form, though, having won their last league five games. Burnley will give it a good go, but I fancy Tottenham to just edge this one.

Burnley vs Tottenham Hotspur will be televised live in the UK on Sky Sports Premier League with kick off at 12:30 PM GMT.

Odds and markets last updated on Saturday 24th February @10:27 GMT. Keep checking back to see if there’s any updates to markets – the time stamp in the previous sentence for when we update tips on this page will be updated.