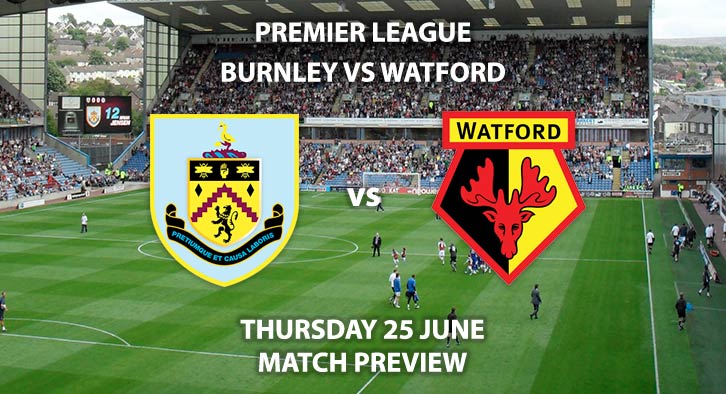 Burnley return to Turf Moor on Thursday night when they host Watford in the Premier League.

Following their 5-0 thumping at Manchester City on Monday night, Sean Dyche will be expecting a response from his side. Burnley are currently 11th in the division and without a win in their last three Premier League encounters.

Watford earned a hard-fought point against Leicester in their return to Premier League action. Craig Dawson’s 93rd minute equaliser cancelled out Ben Chillwell’s 90th minute strike for the Foxes and put them a point above the relegation zone.

Burnley ran out 3-0 winners in this fixture back in November thanks to goals from Chris Wood, Ashley Barnes and James Tarkowski. Wood has netted 11 times for the Clarets this season and is priced at 13/8 on SkyBet to score anytime on Thursday evening.

The Clarets have won three of their last five encounters against Watford and come into this one priced at 13/10 on SkyBet to take all three points. Watford’s last win in this fixture came back in 2018 when they won 3-1 at Turf Moor.

The referee for this clash is Mike Dean. The 51-year old has taken charge of 23 Premier League affairs this season, accumulating a total of 108 yellow cards and 4 red cards; this averages at over 4 yellow per game. Novembers meeting between these two sides produced four yellow cards.

Watford have won only one of their last ten away matches in the Premier League meanwhile Burnley have lost once in their last five at home.

In this fixture, the home side has failed to win in the last four matches which provides some sort of positivity for Watford ahead of this one.

This game will be televised live on Sky Sports Action and Pick TV with kick-off scheduled for 18:00 on Thursday evening.