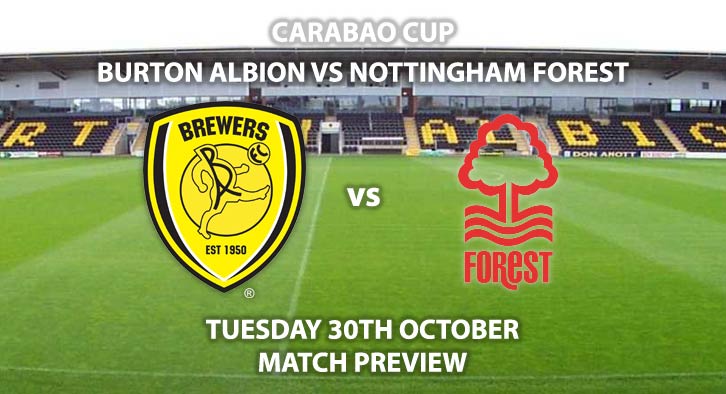 The East Midlands do battle as Burton Albion host Nottingham Forest in the fourth round of the Carabao Cup.

Nigel Clough scored 131 goals for Forest, being their second highest goal scorer in history, but he leads his Burton Albion side against the team his father made history with.

The Brewers have already beaten Premier League Burnley and Aston Villa to get to this stage, and the cup run has been exciting the fans. This game will only intensify that excitement. Burton Albion would love to get one over on Notts Forest.

After extending beyond their means in the Championship, where Burton did exceptionally well to survive for one year, League One is proving a difficult task. They are 16th, only winning two of the last seven matches. Perilously close to the relegation zone with just points separating.

Aitor Karanka’s Forest are faring much better. 7th, and just two points away from the play-off places, Forest fans are dreaming of what could be. Forest have only lost one of the last nine games, earning a 1-1 draw at second-placed Leeds last time out.

The Reds have beaten Bury, Premier League Newcastle United and Stoke City to get to this point. A cup run would equally mean a lot to the of-recent deprived fans of the club.

Both sides will be quite desperate to win this one, dreaming of potentially facing a massive team should they progress. As cup ties go, this will be a tasty affair.

Andy Davies is the man in the middle. This will be his 19th game of the season, racking up a rather large 70 yellow cards and two reds this term.

Burton Albion vs Nottingham Forest will be televised on Sky Sports Football HD and will kick off at 19:45.