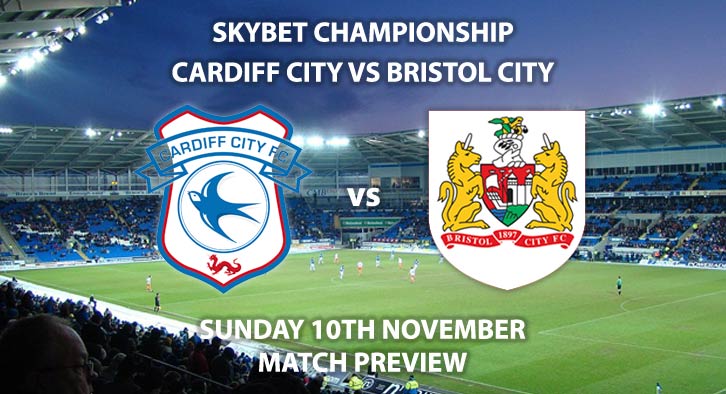 Cardiff City return to The Cardiff City stadium this weekend as they welcome the arrival of Bristol City in the Championship on Sunday.

The Bluebirds will be eager to secure back to back wins following their thrilling 4-2 win over Birmingham City last time round. Joe Ralls struck a hat-trick in the win, which included two penalties. Cardiff however will be without forward Danny Ward, who missed out following his red card in the win over Birmingham.

Bristol City were involved in an entertaining clash last time round. They were held 2-2 as Ashton Gate, and had thought they had done enough for the three points, but for Cauley Woodrow to strike deep into injury time for a share of the spoils, 2-2.

Neil Warnock’s side needed that win over Birmingham, having gone four games without a win prior. Their last win came on the 2nd of October, over a month ago. The Bluebirds however do boast an impressive home record thus far, and are unbeaten on home soil, winning five and drawing two.

Lee Johnson’s Bristol City side find themselves yet again in the play-off mix, and only three points off the automatic places. City are unbeaten in their last three and have lost once in their last fourteen championship matches, a defeat which came away to Luton, losing 3-0. That defeat to Luton is City’s only away defeat of the campaign, and Johnson’s side have shown tremendous consistency and resilience both home and away this season.

Sunday’s clash is the first meeting between the two since 2018 following Cardiff’s relegation from the Premier League in May. It is in fact the Bluebirds who have the better recent record between the two and have won five of the last seven meetings. Bristol; City are without a win against Sunday’s opponents since 2012. Bogey team.

The man in the middle for this clash is Tony Harrington. Harrington has overseen nine Championship matches so far this season, awarding twenty yellow cards, which is just over two per game. this considered, I would recommend a minimum of 20+ booking points for this encounter. Harrington is yet to take charge of a game including Cardiff this season, but did oversee Bristol City’s 0-0 draw with Swansea, where he awarded two yellow cards.

This match will be shown live on Sky Sports Football, with kick off scheduled to take place at 12:00 GMT on Sunday Lunchtime.