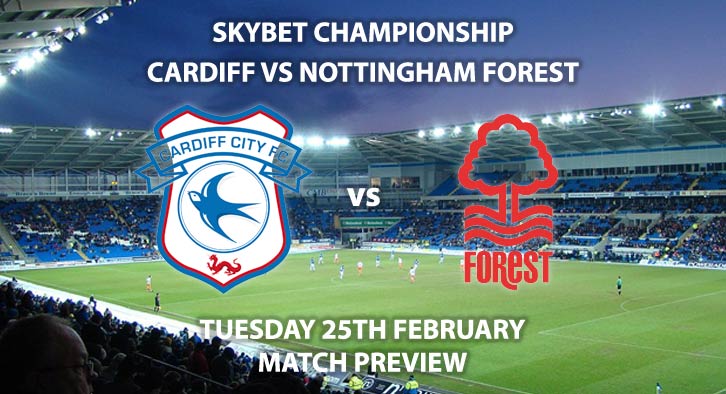 Cardiff return to return to home soil this week as they host Nottingham Forest in the Championship on Tuesday night.

The Bluebirds will be looking for a more positive result in their latest encounter, following the weekends disappointing 2-0 defeat away to Stoke City. Saturday’s defeat means that it’s now two without a win for Neil Harris’ side, who need to return to winning ways if they are to secure a place in the play-off places.

Nottingham Forest on the other hand have lost their way in recent weeks, and with that have lost ground in the race for automatic promotion. Forest have won once in their last five, picking up five points from a possible fifteen. After the victory over Leeds at the start of the month Sabri Lamouchi’s side looked as though would take some stopping, but their recent capitulation has seen them fall as low as fifth.

These two last met in at the end of November where Cardiff ran out 1-0 winners at the City ground. In fact, the Bluebirds have been what can only be described as a bogey team for Forest, and are unbeaten in this fixture since 2012. Cardiff have won nine of the last ten meetings between these two sides, which makes grim viewing for any Forest fan hoping their side can get back on track in midweek. Forest’s last win away at Cardiff came almost a decade ago.

Forest to their credit have displayed positive away form this season, and have lost twice in their last ten matches on the road. SkyBet are offering odds of an away win at 2/1.

The referee for this encounter is Stephen Martin. Martin has taken charge of twenty Championship matches, averaging just under three yellow cards per game. The Englishman has also awarded two red cards this season. This considered I would recommend a minimum of 20+ booking points for this fixture.

Cardiff City vs Nottingham Forest will be televised live in the UK on Sky Sports Football HD with kick-off at 19:45 GMT.