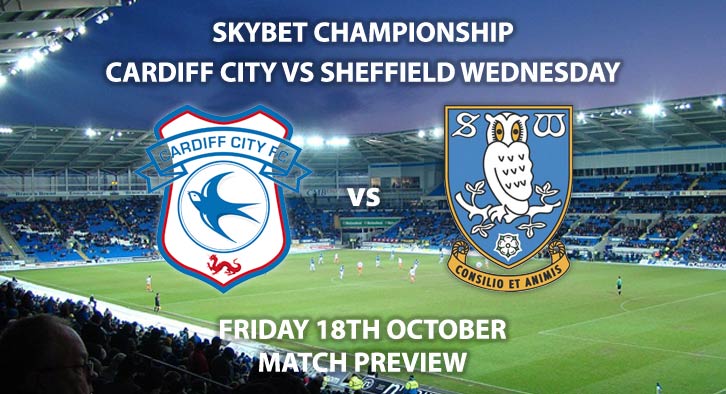 Both sides entered the recent international break with contrasting results. The Bluebirds were hammered 4-2 at the hands of league leaders West Bromwich Albion, meanwhile Wednesday continued their promising start under Gary Monk with a 1-0 victory over Wigan.

Neil Warnock’s side sit 11th in the SkyBet Championship standings, with the defeat at West Brom only their third of the season so far. Before that, City were on an impressive seven-match unbeaten run; winning three and drawing four. The visitors on the other hand sit 8th in the league and have lost once in their last five encounters.

In the build up to Friday nights clash, Wednesday were handed a boost as it appears long-term absentee Fernando Forestieri could be in contention for the trip to Wales after serving a six-match ban issued in July. The Argentine has netted 27 goals and registered 14 assists across his two seasons so far at Hillsborough and would certainly offer additional attacking reinforcement to Garry Monks side, who are currently only a point outside the top six.

Incidentally, it was Forestieri who grabbed the goal the last time Wednesday were victorious against Cardiff back in 2017. His goal coming in the 84th minute to secure a 1-0 home win for Wednesday. Could the Argentine return to inflict more misery on the Bluebirds?

Since Monk’s arrival to Yorkshire, Wednesday have picked up ten points from a possible fifteen, and a win on Friday night would propel them into the thick of the play off places.

It’s Wednesday too who come into this fixture with the recent bragging rights between the two sides and are on a seven-match unbeaten run against Friday nights opponents. Cardiff’s last win came in 2014. The last two meetings between these two sides have resulted in draws, and SkyBet are offering odds of a repeat result at 23/10.

The referee for this fixture is Keith Stroud. The 50-year old has appeared in seven matches so far this season, awarding a total of seventeen yellow cards. This considered, I would recommend a maximum of 40+ booking points for this clash.

This match will be broadcast live on Sky Sports Football, with Kick-off scheduled to take place at 19:45 BST.