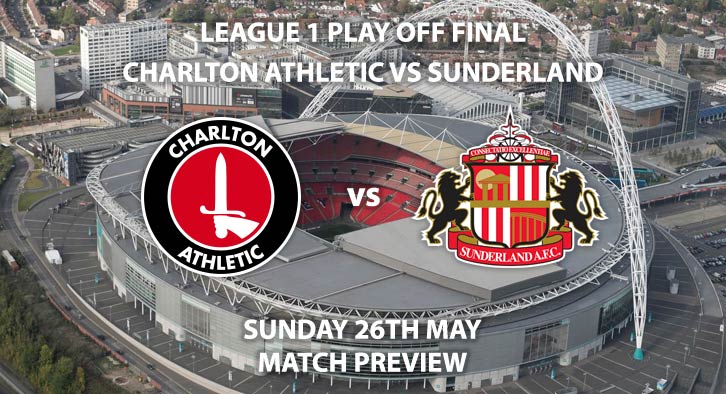 Charlton Athletic and Sunderland both travel to Wembley Stadium to face off in the SkyBet League One play-off final.

Charlton are technically on ‘home turf’ and are priced at 9/5 to win the match by SkyBet. Lee Bowyer’s side are the form club in the division and have lost just twice in the last 18 matches. However, in their two previous meetings with Sunderland they have drawn one and lost the other. Going forward, striker Lyle Taylor has been very impressive with 21 goals this term. He is priced at 13/8 to score anytime.

In six of their last seven wins, they have kept a clean sheet. SkyBet are offering 7/2 for them to win to nil.

Sunderland are priced at a very tempting 13/8 to win. The Black Cats have been a formidable force this season and were favourites to win the league at the start of the campaign. They lost only 5 matches all season – the lowest in the whole division however, with 19 draws they were unable to reach the automatic spots.

One luxury that Sunderland have managed to keep hold of during their EFL demise was Aiden McGeady. The Irish international scored 11 goals during the season and is priced at 11/2 to score first.

The referee for this match will be Andy Madley. This will be only the second time Madley has taken charge of Sunderland this season and he has shown 110 yellow cards and four reds in 39 matches. He averaged around 24 booking points between the various league one and two games he officiated this season.

Charlton Athletic vs Sunderland will be televised on Sky Sports Football HD and kicks off at 15:00.

– The Checkatrade finalists have proved they are hard to beat and can catch teams on the break.