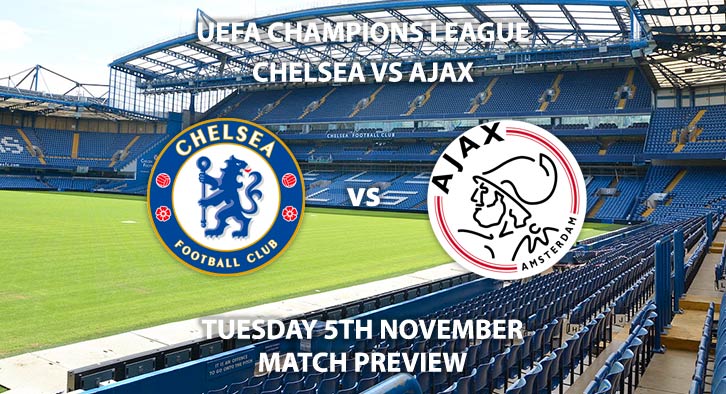 Chelsea return to Stamford Bridge on Tuesday night as they host Ajax on match-day four of the UEFA Champions League.

Frank Lampard’s side enter Tuesday night’s clash in fine form, and currently sit top of the pile in Group H. Chelsea have won their last two CL fixtures, after losing their opening group match to Valencia 1-0 at Stamford Bridge.

Saturday’s 2-1 Premier League triumph over strugglers Watford was the Blues fifth successive away win in the league, which has seen them climb to fourth in the table. Lampard’s side have lost once in their last eleven in all competitions, which was to Manchester United in the Carabao Cup lastWednesday.

Their opponents Ajax come into Tuesday night’s clash second in the group, following their defeat on matchday three to Chelsea. Michy Batshuayi’s 86th minute strike condemned Ajax to their first defeat at home this season, following their impeccable start to this year’s Eredivisie campaign.

Erik Ten Haag’s side are unbeaten in twelve league matches so far this season and have already opened up a six-point lead at the top of the Dutch first tier. Ajax have won ten of their twelve games, drawing two, and their run includes six consecutive victories following the weekend win over Zwolle.

Chelsea will welcome Tuesday’s arrival of Ajax with open arms, as the Blues have an impressive record against Dutch sides in the Champions League. Tuesday’s clash will be Chelsea’s fourth ever a team from the Netherlands, and they’ve won their previous three. They defeated Feyenoord twice in the 1999/2000 Champions League campaign and won their most recent clash against Ajax.

However, Ajax themselves will be confident at the prospect of facing another English team away from home soil in the Champions League. They have never lost a Champions League encounter in England (P4, W1, D3) and will be relishing the task ahead of them on Tuesday evening.

Chelsea vs Ajax will be broadcasted live on BT Sport 2 with kick off scheduled to take place at 20:00 BST. We also have Liverpool’s champions league game preview up on our tips and previews section of the website.