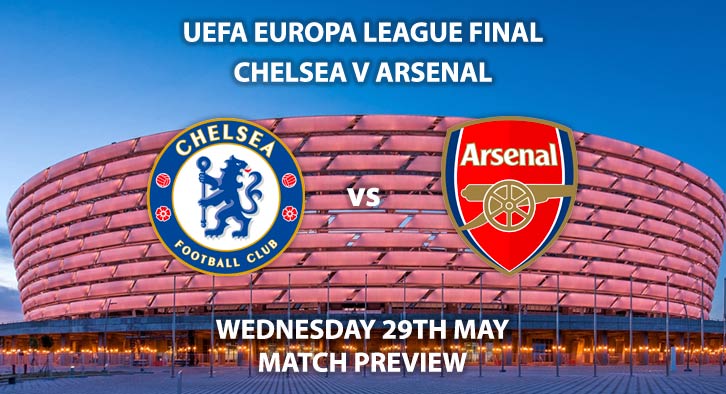 Chelsea vs Arsenal: It’s an all-English affair in the Europa League final as Chelsea and Arsenal go head-to-head in the latest instalment of the London derby, with European silverware up for grabs.

Chelsea come into this match praying for a repeat of their 2013 triumph over Benfica. There are few survivors from that side, six years on, whilst speculation continues over the future of Maurizio Sarri. With Juventus reportedly sniffing around the Italian, this could be his last match as Chelsea manager. Frank Lampard is the favourite to replace Sarri, should he opt for a return to Italy. This could be a farewell trophy for Eden Hazard too, who looks set to move to Real Madrid this summer.

With a transfer ban looming over the Blues’ head, this could be one of the toughest closed seasons in the Roman Abramovic era. Champions League football is secure, at least, regardless of this result. Their route to the final was far from straight forward; they needed penalties to edge past Eintracht Frankfurt in the semi-final. They are yet to lose in this year’s competition, however, which is an impressive feat.

This game has much bigger added implications for the men in red. For Arsenal, this is their one and only shot to secure Champions League football. This is their first European final since losing to Barcelona in 2006. After finishing fifth in the league, Unai Emery’s hopes of acquiring some of Europe’s top talent in the summer window rests on this match. Arsenal have impressed in this competition this season. The knocked out Spanish opposition in the last round, making light work of Valencia with home and away wins. Pierre-Emerick Aubameyang and Alexandre Lacazette have been central to their success in this tournament and the pair will need to be at their best again on Wednesday if they’re to lift the trophy. They will be without Henrikh Mkhitaryan after he stayed at home due to political unrest between Armenia and the final host country Azerbaijan.

Gianluca Rocchi is the referee for this game. The Italian has officiated 13 Serie A matches this season. In that time, he has accumulated an average card total of 5.46. Therefore, I would advise a maximum of 60+ total points for this fixture.

Chelsea are in the better form of the two sides, although that can often go out of the window in a cup final. Given Arsenal’s desperation to secure Champions League football, I’m going to side with them. The pace of Aubameyang and Lacazette may just prove too much for David Luiz and Co to handle.

Chelsea vs Arsenal will be televised live in the UK on BT Sport 2 with kick off at 20:00 BST.

Big Odds RequestABets – Pick 3 from the below at above 50/1 or more – Chelsea vs Arsenal – (SKYBET):