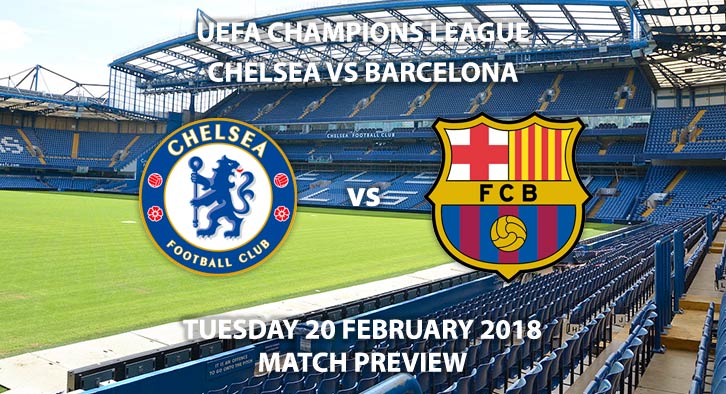 Chelsea vs Barcelona – Chelsea will host Barcelona in the round of 16 in the UEFA Champions League this Tuesday night. As soon as the draw was made, this fixture seemed to be the one that captured the fans imaginations.

All eyes will be on under pressure manager Antonio Conte as he will be hoping to prove he is the right man for the Chelsea job following a run of poor results and performances. This match will be their biggest test possibly all season, against a Barcelona side who are yet to lose a game in La Liga.

In their four previous outings against each other, they have met in the latter stages of this competition, where games have often been very tight with not much to decide the ties. The hosts have scored two or more goals in the Premier League in 51% of their matches whilst Tuesdays visitors have done it in 83% of theirs. Both squads have proven world class goalscorers in Eden Hazard and Olivier Giroud facing off against Lionel Messi and Luis Suarez; all of the aforementioned are capable of snatching a chance, if it comes.

The game could become a rather end to end encounter, with both sides possessing their biggest threats on the counter attack. As the statistics show, their counters have often led to corners as Chelsea have been awarded an average of 6.4 corners in the Premier League and Barcelona have been awarded an average of 5.4 corners. Both clubs also have aerial threats to make one of those corners count.

The occasion is clearly very big for both sides, as any UEFA Champions League match comes with extra pressure. These encounters are often feisty, with many cards being brandished and I don’t see Tuesday night being much different. The referee for this match will be Cuneyt Cakir, a referee renowned for not being very lenient.

The match is first of two legs to be played, with the prize being a place in the UEFA Champions League Quarter-Finals. The match will be televised in the UK on BT Sport 1 and kick off at 19:45.

More markets will be added over the weekend prior to the game kicking off on Tuesday evening. Keep visiting the tips and preview area for further updates and previews for the remainder of this weeks UEFA Champions League action.