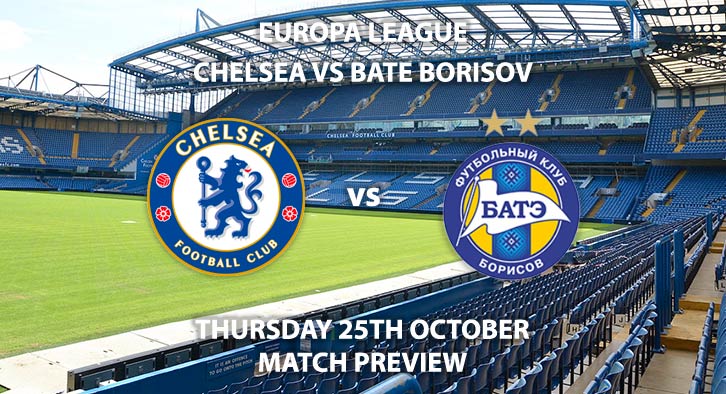 Chelsea vs BATE Borisov – Chelsea continue their search for the Europa League title as they host Belarusian Champions BATE Borisov on matchday three.

With both previous matches in this competition ending 1-0 to Chelsea, they still are yet to overwhelm the inferior opposition. Controlling performances have not yet translated to goals, despite obtaining maximum points and sitting atop Group L. Victory will put Chelsea in a commanding and what will surely be an unassailable position to progress.

Mauricio Sarri’s side have generally been very good this term, remaining undefeated in all competitions and only sit two points away from Liverpool and leaders Manchester City in the Premier League. That unbeaten record was put to the test by Manchester United last time out, salvaging a 2-2 draw with an injury time Ross Barkley equaliser.

That is to take nothing away from the often-scintillating football played under Sarri so far, namely in the form of Eden Hazard. The Belgian superstar tops the league’s scoring charts with seven, but will likely be rested here. An opportunity for another of the attackers, Willian perhaps, to prove his worth.

With the resurgence of Arsenal, who are on a ten-match winning streak, and the renewed consistency of Tottenham Hotspur, both of who are behind Chelsea in the league just on goal difference, any form of complacency could result in The Blues slipping out of the top four. That could seriously elevate the importance of the Europa League’s prize, a place in the Champions League. Such a requirement would represent a failure of Chelsea’s season, however. A European trophy is nothing to be sniffed at though. Just look at the elation of winning this competition in 2013.

BATE Borisov should prove to be easy opposition, especially against the quality of a team like Chelsea. However, it can be troublesome to play a team in the thick of the season, who are up to full speed. BATE have won the last 12, yes 12, Belarusian Premier League’s and look set to make it a lucky 13.

Alyaksey Baha’s side are nine points clear of nearest challengers Shakytor with six games left. Special mention must go to ex-Arsenal and Barcelona playmaker Aliaksandr Hleb, not always a starter these days, returning to London for this clash.

The man in the middle will be Italian referee Paolo Mazzoleni. This will be Mazzoleni’s seventh game of the season and his second in this year’s Europa League. A modest total of just 19 yellow cards precedes him, however seven were given in his only other Europa League match so far, Leverkusen v Ludogrets, which ended 3-2 to the German side.

Chelsea vs BATE Borisov will be televised live in the UK on BT Sport 2 with kick-off at 20:00 GMT.

Odds and markets last updated on Thursday 25th October 2018 @17:04 GMT. Keep checking back to see if there’s any updates to markets – the time stamp in the previous sentence for when we update tips on this page will be updated.