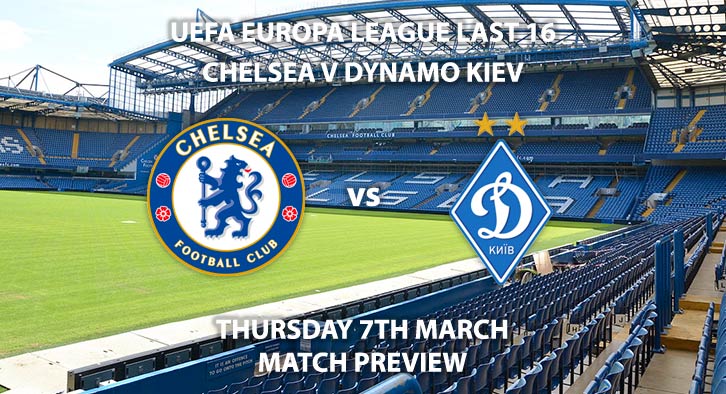 Chelsea vs Dynamo Kiev: Chelsea will be hoping to grab a third consecutive win in all competitions when they take on Dynamo Kiev at Stamford Bridge.

The Blues will be buoyed by back-to-back wins over Tottenham and Fulham. Those results have left them sixth in the Premier League table, two points behind fourth-placed Manchester United, with a game in hand. These two wins have ensured Maurizio Sarri’s side have a fighting chance of finishing in the top four this seas. Securing Champions League football, via any route, has to be the priority for the Blues this season. That puts more emphasis on winning the Europa League, in case they miss out on the top four.

With just 16 teams remaining, there will be an onus on Sarri to name a strong team, to avoid any slip-ups. Gonzalo Higuain will be rested, despite grabbing his third goal for the club at the weekend, but Ruben Loftus-Cheek, Callum Hudson-Odoi and Willian are all expected to start the game. The Blues are unbeaten at Stamford Bridge in the competition this season and have won six of their last seven home matches in all competitions.

Dynamo Kiev head into this tie as massive underdogs. To make things even tougher, they have never won a European match on English soil, with the Ukrainians drawing three and losing 11 of their 14 previous visits – most recently a 0-0 draw at the Etihad against Manchester City in the Champions League last 16 back in March 2016. In addition, Dynamo Kiev have not won any of their last nine first-leg knockout matches in the Europa League (D6 L3). In the league, Kiev sit second, seven points adrift of rivals Shakhtar Donetsk. They’ve won their last four league games, conceding just once.

Slavko Vinčić is the referee for this game. He has officiated two Europa League games already this season, issuing nine yellow cards in the process. Overall, he has shown 90 cards in 18 games, averaging at 5 per match. As a result, I’d recommend a maximum of 60+ total booking points for this fixture.

Chelsea are rightly strong favourites for this game. They are by far and away the stronger side, on paper. Kiev won’t make things easy for them, however, I still fancy the Blues to get all three points.

Chelsea vs Dynamo Kiev will be televised live in the UK on BT Sport 2 HD and kicks off at 20:00.

Odds and markets last updated on Thursday 7th March 2019 @18:12 GMT. Keep checking back to see if there’s any updates to markets – the time stamp in the previous sentence for when we update tips on this page will be updated.

Remember to keep visiting the tips and preview area for further updates and betting previews around the weekend’s domestic action.