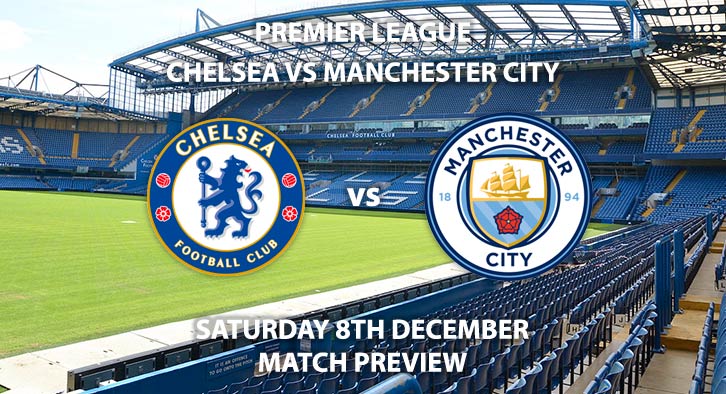 Chelsea vs Manchester City – the Champions will be looking to continue their assault on the Premier League title when they face Chelsea at Stamford Bridge on Saturday.

The Citizens took another three points in midweek, with a 2-1 win at Watford. In truth, it should have been a much larger margin of victory, after controlling the game for large portions. It wasn’t until Watford pulled one back in 83rd-minute that City ever looked like they’d not win the game.

Riyad Mahrez was at his sparkling best, setting up the first goal and scoring the second. That result means City have dropped just four points from their opening 15 games and remain unbeaten. If they continue on their current trajectory, they will finish on 104 points, surpassing last year’s record of 100. It would also be the first time they have ever retained the Premier League, which would be an important feat.

Chelsea found themselves undone against out-of-form Wolves in midweek as they lost 2-1 at Molineux. Despite taking the lead through Ruben Loftus-Cheek, Maurizio Sarri’s side threw away their advantage as Wolves turned the game on its head. Sarri made a few changes to his midfield, with Mateo Kovacic and Jorgino left out, although they are likely to return to the side this weekend. That was only Chelsea’s second defeat of the season but both have come in their last four games.

Those losses have been a reminder to some that Chelsea are still a work in progress. They struggled under Antonio Conte last season and it will take time for Sarri to get the side the way he wants it. These defeats may help to dampen expectations a little, after such a strong start to the season.

Andre Marriner is the referee for this game. The Englishman has officiated 13 top-flight games this season. In that time, he has accumulated an average booking points total of 32.3. Therefore, I would recommend a maximum of 50+ total points for this fixture.

Chelsea will be wanting to bounce back from their midweek defeat, whilst City have been relentless in their surge for the title. City won here at Stamford Bridge last year thanks to Kevin De Bruyne’s goal. Whilst the Belgian won’t be on the field on Saturday, I think City will come away with another three points.

Chelsea vs Manchester City will be televised live in the UK on BT Sport 1 with kick-off at 17:30 GMT.

Odds and markets last updated on Saturday 8th December @14:15 GMT. Keep checking back to see if there’s any updates to markets – the time stamp in the previous sentence for when we update tips on this page will be updated.