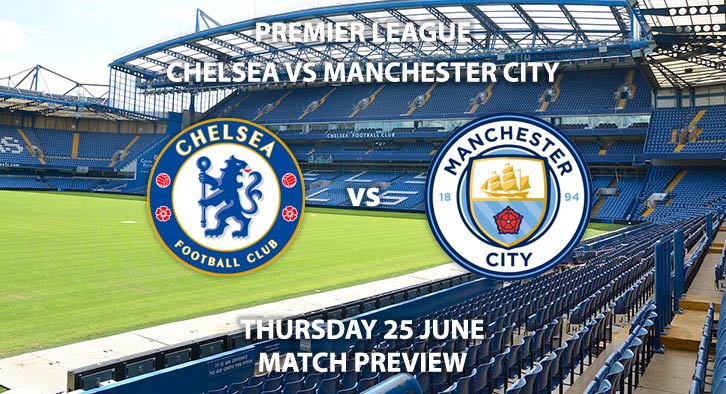 Chelsea return to Stamford Bridge on Thursday night when they host Manchester City in the Premier League.

The result of tonights night’s clash could crown Liverpool as Premier a league champions if Chelsea were to go on and beat City.

Frank Lampard’s side came from behind to win at Aston Villa on Sunday, a result which strengthened their bid to secure Champions League football for next season. The Blues currently sit 4th on 51 points, 4 points ahead of closest rivals Manchester United.

Manchester City continued their emphatic return to Premier League Action with a 5-0 win over Burnley on Monday night. Pep Guardiola’s side have now hit 8 goals in their two matches since the leagues return.

City ran out 2-1 winners back in December thanks to goals from Kevin De Bruyne and Riyad Mahrez. The latter netted twice in City’s rout over Burnley and is priced at 12/5 on SkyBet to score anytime on Thursday.

Stuart Attwell is the man in charge of this one. The 37-year old has overseen 16 Premier League encounters this season, accumulating a total of 71 yellow cards and 2 red cards; an average of just under 4 cards per game. November’s meeting between these two sides produced 2 yellow cards.

Chelsea midfielder Jorginho has been yellow carded in both of his appearances against Manchester City in the Premier League and is priced at 13/8 to be carded on Bet365.

Kevin De Bruyne scores from outside the area in November’s meeting and SkyBet are offering odds of 10/1 for a repeat on Thursday evening.

Manchester City have won six of their last seven meetings against Chelsea and are priced at 5/6 on SkyBet to take all three points in this one.