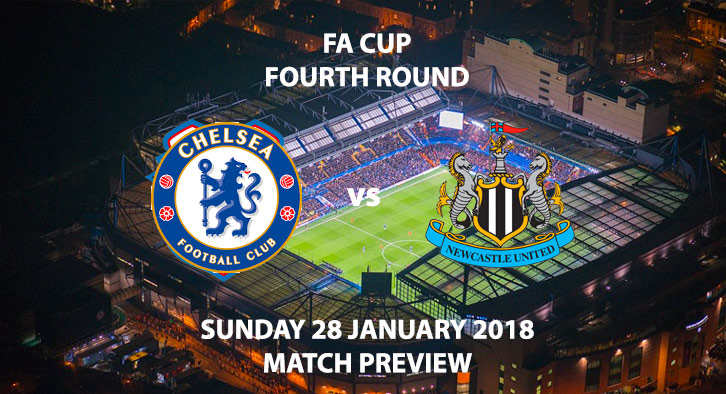 An all-Premier League tie sees Chelsea vs Newcastle fight for a spot in the fifth round of the FA Cup.

After crashing out of the Carabao Cup in midweek, Chelsea have only the FA Cup for domestic silverware this season. Despite Eden Hazard’s early strike, Chelsea came unstuck 2-1 as they watched their London rivals progress into the final to play Manchester City.

In the last round, Chelsea needed penalties to progress against Championship side Norwich in a game that saw the Champions reduced to nine men. Despite putting four goals past Brighton in their last Premier League outing, Chelsea have still managed just six goals in their last six games. Hazard’s return to form could be key, as the Belgian looks to secure the club a top-four finish and some silverware come the end of the season. With Chelsea reportedly close to finalising a deal for Roma pair Edin Dzeko and Emerson Palmieri. Dzeko will provide much-needed cover and support for Alvaro Morata, with reports suggesting Michy Batshuayi could head the opposite way on a loan deal. The Bosnian forward has vast Premier League experience from his time at Manchester City and could be the perfect tonic to revitalise a faltering attack.

Newcastle’s new signing Kennedy will be unavailable to make his debut after signing on loan Stamford Bridge. The winger has struggled for game-time at Chelsea and a move to Rafa Benitez’s side could help unleash the Brazilian’s undoubted potential. Benitez will be sighting further additions to bolster his squad, with a striker at the top of his wish list. Despite the club being up for sale, Mike Ashley has promised Benitez January funds in order to keep his side in the Premier League. In the last round of the cup, Newcastle avoided an upset against an in-form Luton Town side as they came away 3-1 winners. They have lost just two of their last seven wins and have beaten both Stoke and West Ham, two clubs fighting against them in the battle to avoid the drop.

Chelsea have won four of their last six fixtures with Newcastle, losing just once. The Toon army’s last win at Stamford Bridge came back in May 2012, over five years ago. Whilst Newcastle are unbeaten in their last four meetings at St James’ Park, winning three, it will be a much tougher order away from home. Kevin Friend has been appointed as the referee for Sunday’s game. He has an average booking points of just 26.9, brandishing an average of 2.7 yellow cards per game. He is also one of just five Premier League officials yet to brandish a red card this campaign.

Despite their poor run in front of goal, I think Chelsea will be buoyed by their recent win over Brighton. If Hazard plays, I think it’ll be extremely tough to stop the Chelsea man in his current form. Without the Belgian, Chelsea are a different proposition and it has been proven this season they can be vulnerable.

Batshuayi and Willian to both score – 9/2.