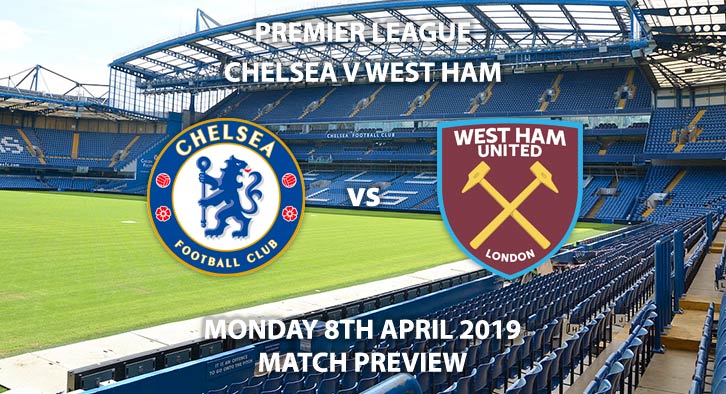 Chelsea and West Ham will battle in a feisty derby in the Premier League this Monday night.

The home side are still pushing for a top four spot in the league after their 3-0 win over Brighton in their previous outing. Meanwhile, The Hammers will want to make up for their 2-0 loss to Everton last time out.

Chelsea are favourites for this match and are priced at 2/7 to win by SkyBet. The home side have much more to play for than their mid-table opponents. They are currently fifth in the league, with a win possibly taking them to third. Their home form will give them confidence with six matches unbeaten at Stamford Bridge in the league. Attacker Eden Hazard has been the stand out performer with 14 goals and 12 assists. The Belgian is priced at 14/5 to score first. He is also part of the double-up boost for 2+ shots on target in the first half at 5/1.

When they met earlier in the season, it ended 0-0. SkyBet are offering 9/2 for another draw this time out.

West Ham are huge under dogs for this match and are priced at 9/1 to win. The visitors have been a formidable opponent to their top six opponents this season. They have managed 2 wins and 2 draws against the labelled top six this season. Talisman Marko Arnautovic has recently returned from injury and international break where he bagged himself a brace for Austria. He is 16/5 to score anytime.

The referee for this match will be Chris Kavanagh. The official has averaged 34.5 booking points this season in the top-flight. The last time these two met there were 30 booking points, however in a derby match it can get fierce.

Chelsea vs West Ham United will be televised live in the UK on Sky Sports Premier League HD and kicks off at 20:00.

– The home side have a lot at stake and clearly have the more talented attackers.

Odds and markets last updated on Monday 8th April 2019 @15:02 GMT. Keep checking back to see if there’s any updates to markets – the time stamp in the previous sentence for when we update tips on this page will be updated.