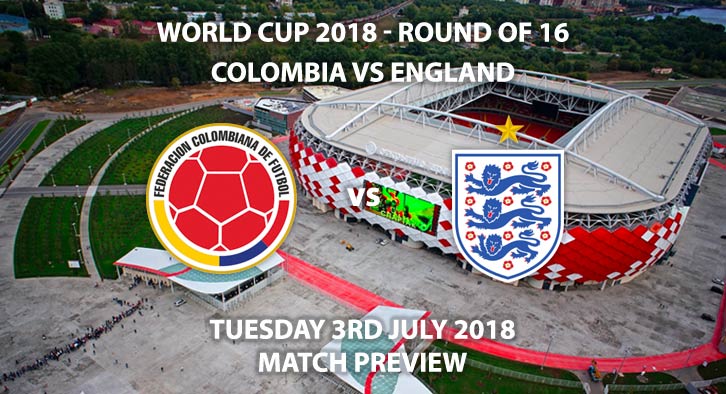 Colombia vs England – Is football coming home? Colombia stand in the way of England on their quest to World Cup glory.

A wave of optimism and patriotism has overcome the ever-vociferous England fans during this campaign. An injury time winner in the first match against Tunisia and Panama’s 6-1 demolishing have helped instil belief. Harry Kane topping the Golden Boot charts with five (including a hat-trick against Panama) solidifies this. The Spurs hitman has scored at a rate of one every 31 minutes so far this tournament. Kane to score at anytime is 6/4 with SkyBet.

The last match against Belgium was a dead rubber. Both sides made wholesale changes as England slumped to a 1-0 defeat via Adnan Januzai’s great goal. However, this put England in the ‘better’ half of the draw with a path to the Final that, even if the favourites of other matches win, reads (in order) Colombia, Switzerland in the quarters then Croatia in the semi-finals. What a fantastic opportunity to make history.

Gareth Southgate’s side still first have to navigate a difficult task in the form of Colombia. After going down to ten men and losing their first match 2-1 to Japan, Colombia have recovered very well. Jose Pekerman’s side destroyed Poland 3-0, playing some brilliant football, before earning a hard-fought 1-0 victory over Senegal (courtesy of a Yerry Mina header) in the winner-takes-all last group stage game.

A lot of the pre-match talk has been involving Colombia’s star man James Rodriguez. The Bayern Munich playmaker came off in the first half against Senegal and is a major doubt for this game. His absence will be a huge boost for England as everything goes through his mercurial talent.

Colombia still possess quality throughout the team though, Radamel Falcao, Juan Cuadrado, Juan Quintero are all dangerous going forward whilst Mina and Davison Sanchez of Barcelona and Tottenham Hotspur respectively are at the heart of defence. Mina and Stones (who’s already scored twice) to both get at least one shot on target each is 25/1 with SkyBet

England will come into this game as favourites, but it could be a beautifully poised match. Especially as both teams try and play football that is easy on the eye. The path to glory is there for both teams, who will break the mould and take it?

In line with this, an appealing request-a-bet is Kane to score first, England to win and both teams to score. The RAB has shortened from 16/1 too 14/1 with SkyBet.

Keep visiting Tips and Previews ahead of games to get our suggested tips and correct score picks for the games. Tips updated at 18:25 GMT on 3rd July 2018.