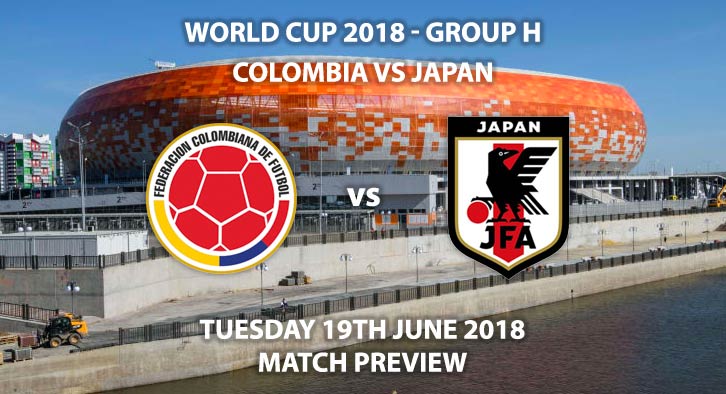 Colombia vs Japan – In an extremely competitive Group H, 2014 quarter-finalists Colombia face Japan looking to justify their status as favourites to qualify.

Jose Pekerman’s side truly impressed at Brazil in four years ago. A 4-1 victory in this fixture the peak of the sumptuous attacking football seen. A repeat of that result is a boosted 50/1 with SkyBet. Colombia crashed out to the hosts last time but are strongly fancied to go just as far in Russia.

However, this will be a different sort of test. It may be Los Cofiteros’  best team in decades but that sort of tag brings its own pressures. Winning just twice in the past nine games isn’t ideal pre-tournament form either. After missing the last World Cup through injury, Colombia will, however, be able to call upon record goalscorer Radamel Falcao.

Falcao failed to impress in England but has been on fire upon returning to parent club AS Monaco. 54 goals in 79 appearances over the past two seasons is a brilliant return, and as a result has been installed as captain. Falcao to score first and Colombia to win 1-0 is a tasty 22/1 with SkyBet.

Group H should prove a massive challenge for Japan to navigate. Two capable teams in Poland and Senegal make up the rest of the group, seeing Japan labelled as the underdogs.

The Blue Samurai topped Group B in Round Three of the Asian Confederation’s World Cup qualifying. Both Saudi Arabia and Australia (who needed a play-off) finished a point behind.

Japan’s biggest pre-World Cup news is that they sacked manager Vahid Halilhodzic and gave the reigns to Akira Nishino. Nishino got the qualification job done by guiding the country through to their sixth successive World Cup. However, somewhat of a stir has been caused by dropping star Shinji Kagawa.

Kagawa isn’t the only big name in the team though. 2015/16 Premier League winner Shinji Okazaki and cult hero Keisuke Honda are both in the ranks. The latter has been involved in five of Japan’s six goals at the previous two World Cups and if Japan were to cause a shock the ageing playmaker, now 32 and at Mexican side Pachuca, will surely be at the heart of it.

Colombia are unbeaten in all of their previous three meetings against Japan, and *should* have enough quality to ensure victory. Pekerman’s team might need to with how close this group promises to be.

Colombia vs Japan will be televised live in the UK on BBC 1. Kick off is at 19th June 13:00 BST, Mordovia Arena, Saransk.