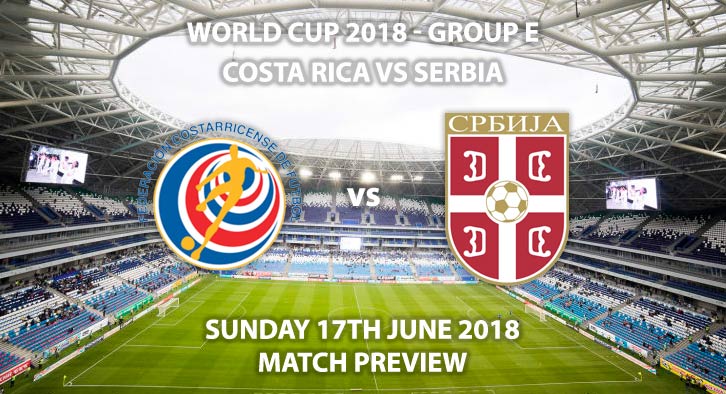 Costa Rica vs Serbia – Costa Rica take on Serbia in Group E’s second match, with both teams hoping for a good start in their quest to reach the round of 16.

Costa Rica were the surprise package in Brazil four years ago, topping a group that contained Uruguay, Italy and England. The South Americans proved they were capable of competing with some of the world’s big hitters and will be hoping to do the same four years on. In recent warm-up friendlies, they have failed to impress, however. England comfortably beat them 2-0 just six days ago. The most worrying part of their performance was their inability to threaten a defensively-vulnerable England team. Joel Campbell, who was their star man in Brazil, was the only player who looked capable of threatening. They’ll be hoping the Arsenal winger, who spent the season on loan at Real Betis, can replicate that form and guide them out of the group. Former Fulham playmaker Bryan Ruiz captains the side, whilst also providing creativity in attack.

Serbia finished as top dogs in their qualifying group that contained both the Republic of Ireland and Wales. They lost just one game on their way to qualification, beating both sides in the process. Fulham loanee Alexandar Mitrovic was their star striker as he grabbed six goals in the process. He will be hoping to continue that form in the World Cup, where he is expected to start as a lone striker. Serbia also boast former Premier League defenders Alexandar Kolarov and Branislav Ivanovic within their ranks. Both defenders were crucial during their qualifying run and as a result they conceded just ten goals. Kolarov also provides an attacking threat; the former Manchester City fullback is renowned for his powerful left foot.

Both these teams have a realistic chance of qualifying from Group E. With Brazil expected to top the group, it will be an interesting battle between these two sides and Switzerland. Based on Costa Rica’s poor performances in recent friendlies, therefore I think Serbia will edge this one. Although, don’t be surprised if it ends in a draw.

Costa Rica vs Serbia will be televised in the UK on ITV1 with kick-off at 17:00 GMT.