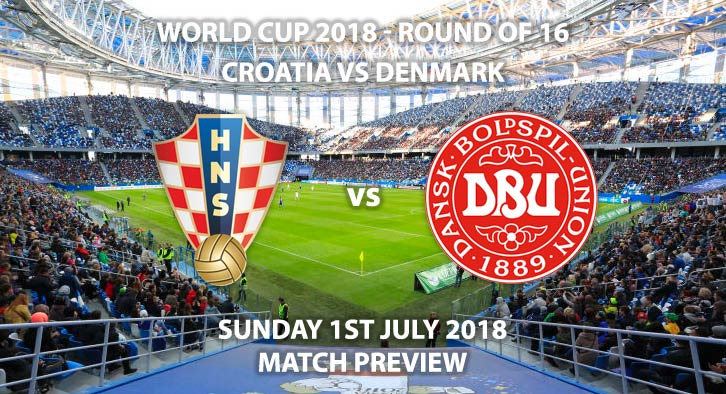 Croatia vs Denmark – Two of the world’s finest midfielders go head to head as Luka Modric and Cristian Eriksen both hope to lead their sides into the quarter-finals of the World Cup.

Croatia topped Group D with three wins out of three. Their last-gasp 2-1 win against Iceland extended their winning run as Ivan Perisic grabbed his first goal of the tournament. After blowing past Argentina, Croatia have gone down as mosts ‘dark horses’ for the competition. By winning the group they have avoided meeting Brazil, Portugal and France. Spain could stand in their way in the quarter-finals, but as they say ‘you have to beat the best to be the best’.

Modric has already proven he is one of the best in this tournament. He has carried his form for Real Madrid into the Blue of Croatia and has led by example. In a more advanced role, Modric has shown his magic with fantastic vision, passes and even a couple of goals. For me, he is the best midfielder in the world at the moment and is so crucial to this Croatia side.

Denmark played out a dull 0-0 draw with France to confirm their spot in the last 16. The Dane’s remain unbeaten after picking up two draws and a win in Group C. Their success has been built on a solid foundation at the back; they’ve conceded just one goal in the tournament and 0 from open play. Andreas Christiansen played in a less familiar holding midfield role against France but I would expect him to return to the heart of the defence going forward. In attack Eriksen has been at his usual best; keeping Denmark ticking over. With one goal to his name, the Spurs’ midfielder has continued his best ever scoring season at international level. Like Modric, Eriksen is Denmark’s conductor and all their best play flows through him. It will be a really interesting matchup to see how both sides try to stop the other’s maestro.

Nestor Pitana is the referee for this game. The Argentina official has averaged 4.67 yellow cards and 0.25 red card per game across 84 international matches. Therefore, I would advise a maximum total of 40+ booking points for this game. Penalties may also be a good shout, with Pitana averaging a penalty every 0.2 games; with VAR involved that percentage is only likely to increase.

Croatia have a lot of big game players with plenty of experience. Denmark, by contrast, are a relatively inexperienced group and that could tell. I don’t think there will be a lot in the game and therefore Croatia’s extra knowhow could see them pinch a spot in the last eight.

Croatia vs Denmark will be televised live in the UK on ITV 1 with kick-off at 19:00 GMT.

Don’t forget – we will be previewing as many if not all the FIFA 2018 World Cup Group Stage games. Keep visiting Tips and Previews ahead of games to get our suggested tips and correct score picks for the games.Tips updated at 10:35 GMT on 1st July 2018.