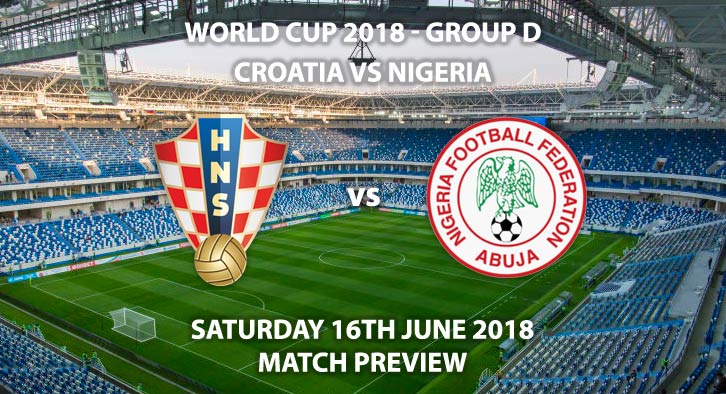 Croatia vs Nigeria – Croatia and Nigeria will be hoping for fast starts to the 2018 World Cup as they face off with each other in their Group D opener.

Croatia have taken many peoples title as ‘dark horses’ for the tournament. Their experienced squad is brimming with European talent that seem to go a little unnoticed on the international stage.

Real Madrid’s Luka Modric and Mateo Kovacic link up with Barcelona’s Ivan Rakitic to form a midfield that all other nations would be proud to have. The tricky Ivan Perisic will bring the flair whilst seasoned goal scorer Mario Mandzukic will bring the finishing touch. All of this excitement going forward along with Jan Subasic in goal means there is no reason why Croatia can’t go all the way.

They will face Nigeria – who not only have won the award for best kit at the World Cup – but will also be trying to prove they’re worth the colourful material they play in.

They failed to do so in their recent warm up matches with losses to Czech Republic and England alongside a difficult 1-1 draw with Congo. Arsenal youngster Alex Iwobi will be likely to take a more central role along veteran John-Obi Mikel. Chelsea full-back Victor Moses could feature higher up the field to utilize his pace.

Ahmed Musa is another name to watch out for. The Leicester City flop has plenty of responsibility on his surprisingly young shoulders; with 72 caps at 25-years-old. Since returning to the Russian League, Musa has reignited his goal scoring form. On technically ‘home soil’ for him, he could cause the ageing Croatian side a headache and is priced at 7/2 to score anytime.

The Africans are priced at 9/2 to provide a shock against the Croatians who are priced at 8/11 to get their campaign off to winning ways. Neither nation is favourite to win the group with Argentina and Iceland occupying the other two spots.

– The ‘dark horses’ have too much quality in their side for the Nigerians.

– He’s the classiest player on the pitch and although he isn’t known for his goal scoring, he is the only Croatian to ever score in two different European Championships and possesses the killer instinct.

– Croatia are slow burners in matches. Whether they’re conceding or scoring their last three games have been goalless at half time.