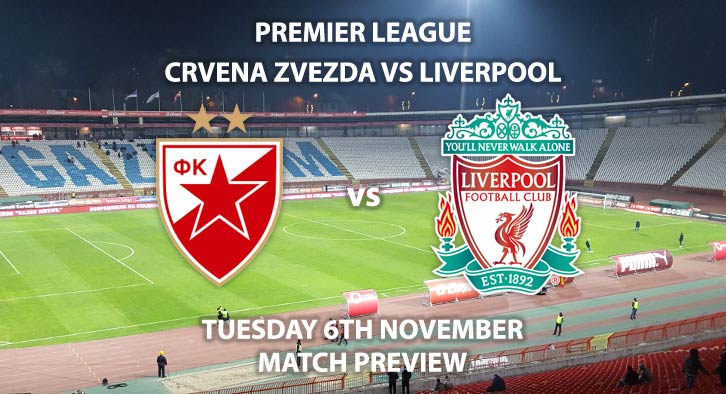 Crvena Zvezda vs Liverpool: Liverpool will be looking to seal their place in the knockout stages of the Champions League when they take on Crvena Zvezda on Tuesday night.

The Reds bounced back to their defeat against Napoli with an emphatic 4-0 victory against Crvena Zvezda at Anfield. Mohamad Salah, Roberto Firmino and Sadio Mane were all on the scoresheet as they romped to victory a fortnight ago. In the Premier League, it has also been smooth sailing for Jurgen Klopp’s side, as they maintained their unbeaten start to the league with a 1-1 draw with Arsenal at the weekend. It was only the fifth goal that the Reds have conceded in the league this campaign, such has been their defensive improvement. The only disappointment for Klopp was that his team couldn’t hang on to their slender advantage as Alexandre Lacazette equalised with eight minutes of normal time remaining.

Liverpool know that a win in this match will all but seal their place in the knockout rounds of the Champions League. The Reds must still travel to PSG and host Napoli, but if they could take another three points from Red Star Belgrade, they would have nine points from four games. That would put them in a very strong position, with just two games to go in Group C. They will be without Xherdan Shaqiri for this game, who has been left out of the squad due to political reasons, given his Serbian background.

Crvena Zvezda (Red Star Belgrade) sit bottom of Group C, with one point from their opening three fixtures. They currently top the Serbian SuperLiga, having taken 43 points from a possible 45 in the league. Their only defeats of the campaign have come in this competition, although it was a 6-1 loss at the hands of PSG and 4-0 to Liverpool. Richmond Boakye is their main source of goals, having scored five times in the league already this campaign.

Antonio Mateu Lahoz s the referee for this game. The Spanish official plies his trade in La Liga, where he has taken charge of five games this season. Across those matches, he has averaged four cards per game. As a result, I would advise a maximum of 50+ total booking points for this fixture.

Liverpool romped to victory when these sides last met at Anfield. I can’t see anything other than a repeat of that performance, which would put Liverpool in pole position in Group C.

Crvena Zvezda vs Liverpool will be televised live in the UK on BT Sport 2 with kick-off at 17:55.

Odds and markets last updated on Tuesday 6th November 2018 @13:24 GMT. Keep checking back to see if there’s any updates to markets – the time stamp in the previous sentence for when we update tips on this page will be updated.