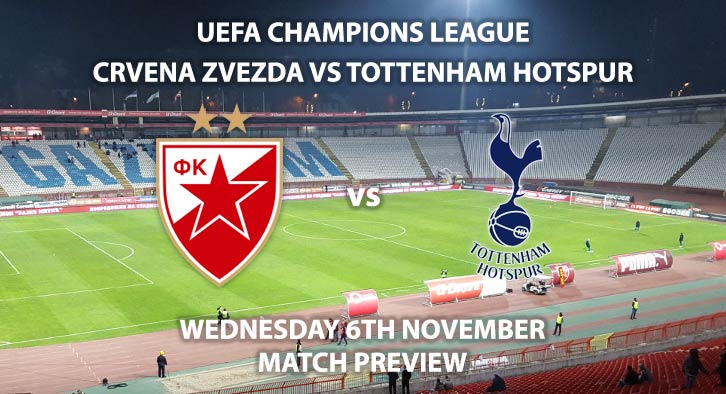 Mauricio Pochettino’s out of sorts Tottenham Hotspur travel to Crvena Zvezda in Champions League action this Wednesday. Spurs need another emphatic victory in Group B   as the previous 7-1 loss to Bayern Munich removed any comfort for the North Londoners in the standings. Meanwhile, Crvena Zvezda will want revenge after the 5-0 drubbing they received in the reverse fixture.

Crvena Zvezda are priced at 9/2 to keep their Champions League dream alive. The Serbians were simply outclassed when they travelled to London. However, they have won their last three matches in convincing fashion and will feel they can damage this inconsistent Spurs side.

Striker Richmond Boakye is recently back from injury and missed his sides trip to Tottenham last month. Boayke scored in his cameo appearance back against Proleter and is priced at 14/5 to score anytime in front of a home crowd.

Spurs are priced at 4/7 by SkyBet to win this match, after convincingly beating the Serbian outfit in the reverse fixture. Last round, Spurs got straight out of the blocks and were 3-0 up at half time. The performance showcased desire that had been missing in previous matches and they still have this point to prove going into this one.

Striker Harry Kane has been consistently on top of his game, despite the players behind him being hot and cold. Kane scored a brace in the reverse fixture and is priced at 12/5 to open the scoring this Wednesday.

Another tempting market is the price on Spurs to win to nil. You get odds of 2/1 with SkyBet and they won 5-0 in the last meeting.

The referee for this match will be Spaniard Carlos del Cerro Grande. In the last match between these two, only one card was shown. SkyBet are offering 8/11 for 40+ booking points.

Crvena Zvezda vs Tottenham Hotspur will be televised on BT Sport 2 HD in the UK and kicks off at 20:00 GMT.

The visitors have too much quality in forward areas for the hosts to be able to keep a clean sheet.