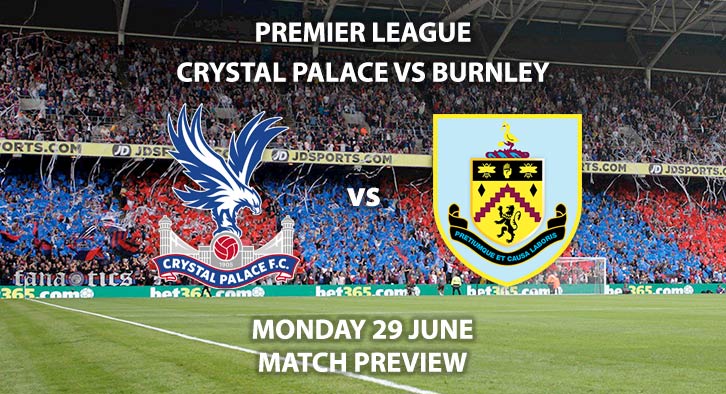 Crystal Palace return to Selhurst park when they host Burnley in the Premier League on Monday evening.

Roy Hodgson will be hoping for a response from his side after defeat at the hands of newly crowned champions Liverpool in their most recent encounter. Burnley meanwhile will be hoping to gain momentum following a hard-fought 1-0 victory over Watford on Thursday evening.

Palace’s defeat to Liverpool was their first in five Premier League fixtures, and their impressive form has seen them climb into the top half of the table. The eagles have won their last two home matches in the league and come into this one priced at 5/4 on SkyBet to win.

Burnley are a place below Palace on goal difference and have the chance to leapfrog them with a win on Monday evening, Sean Dyche’s side defeat to Manchester City last Monday was their first in eight Premier League matches and their first in four away matches in the league. They come into this one priced at 12/5 on SkyBet to grab all three points.

Palace have a tremendous recent record in this fixture and have won the last four meetings. Burnley’s last win came in September 2017. Palace were 2-0 winners in the reverse fixture back in November thanks to goals from Wilfried Zaha and Jeffrey Schlupp.

Wilfried Zaha has scored on his last two appearances against Burnley and is priced at 3/1 to score anytime on SkyBet in this one.

The referee for Monday night’s clash is Simon Hooper. The 37-year old has taken charge of 9 Premier League matches this season, accumulating 27 yellow cards and 2 red cards; an average of three yellow cards per game. Two yellow cards were brandished in Novembers meeting between these two.

This match will be shown live on Amazon Prime with kick-off scheduled to take place at 20:00PM on Monday evening.