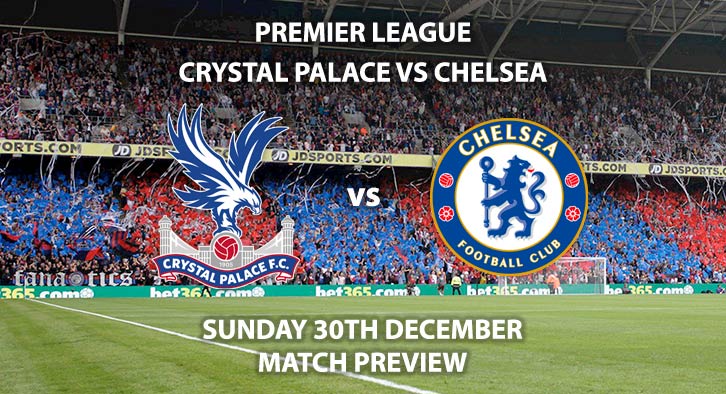 Crystal Palace will entertain London rivals Chelsea in Premier League action this weekend in the final game week of 2018.

The hosts will still be on a high after their 3-2 victory over Manchester City two games ago which has seen them climb the table to 14th. Meanwhile, Chelsea need to regain their form from the start of the season with three defeats in their last seven matches.

Crystal Palace are 4/1 to win this match by SkyBet. The home side enter this match on the back end of a 0-0 draw with Cardiff. They have two defeats in their last six matches. However, their home form has not made for positive viewing. They have been goalless six times at home this season from nine games. Andros Townsend and Wilfried Zaha have been the two attacking threats for Palace – however have not score many goals. Zaha is 5/2 to score anytime whilst Townsend is price boosted on SkyBet to 18/1 to recreate another memorable goal from outside the penalty area.

Palace have struggled defensively with 25 goals conceded in 19 matches. 72% of the goals they concede have been in the second half of matches. Their opponents are 6/4 to score in both halves.

Chelsea are favourites for this match and are priced at (link no longer available). The threat of the Blues speaks for itself with Eden Hazard leading the way with 10 goals and nine assists. The Belgian has been as impressive as ever and is (link no longer available) to break the deadlock this Sunday. Sarri’s side have been in good form on the road with 19 points taken from 9 matches.

Their last two away matches have resulted in 2-1 victories and three of the last four matches between them and Palace have seen a 2-1 score line. So, a 2-1 is written in the stars, surely?

The referee for this match will be Craig Pawson. The official has been very card happy this season with an average of 48.8 booking points in his 12 Premier League matches. I’d expect a few cards to be brandished this Sunday.

Crystal Palace vs Chelsea will be televised on Sky Sports Premier League HD and kicks off at 12:00.

It will be a close encounter however I expect Chelsea’s quality to be just enough.

Odds and markets last updated on Sunday 30th December @09:44 GMT. Keep checking back to see if there’s any updates to markets – the time stamp in the previous sentence for when we update tips on this page will be updated.