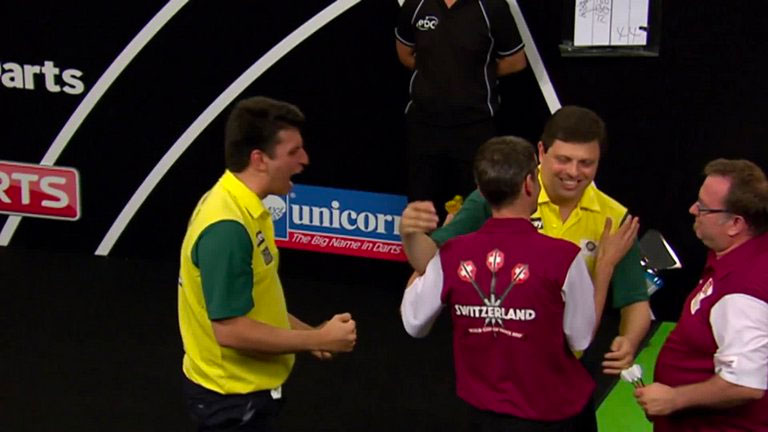 It’s day three of the 2017 PDC World Cup of darts. Yesterday, history was written as World Cup debutants, Brazil, beat Switzerland 5-4 to progress to the second round. Following a competitive, back and forth match of darts, the Brazilians broke into tears in a magical moment in Frankfurt.

Wales face Ireland in what promises to be a tasty encounter. Both teams illustrated great resilience in their round one matches, overcoming awkward opposition. Gerwyn Price will look to continue the red hot form on the trebles after an awe inspiring first round performance against Finland. Mick McGowan will also look to improve upon his impressive first round performance for Ireland. A win for either side would be huge for them, Wales should just tip it as they showed great teamwork and chemistry, unlike many other teams have so far in the World Cup.

The shock team of the first round, Singapore, face up against Spain in the second round. Paul Lim and Harrith Lim both created darting history in the first round, knocking out Scotland’s Gary Anderson and Peter Wright in a rather phenomenal match of darts. 63-year-old, Paul Lim, is representing his third country; Papau New Guinea and USA being the first two. They face a Spain side that scraped through the first round against Japan, in an unconvincing performance, yet solid enough. This one should be an entertaining match, can Singapore continue the fairytale?