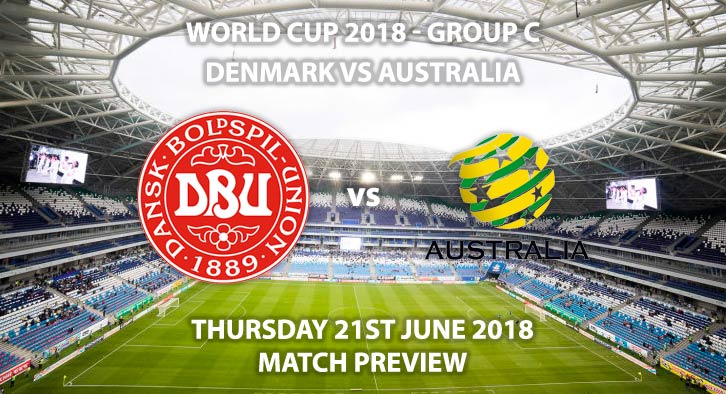 Denmark vs Australia – the Australians require a victory to give themselves any chance of making the last 16 against Denmark who can secure qualification with a win themselves.

The Socceroos were embroiled in VAR controversy during their narrow 2-1 loss against France in their first game. A penalty was given for France’s opener that was subject to a contentious VAR decision.

An equalising Mile Jedinak penalty wasn’t enough as Paul Pogba surged forward to claim a French winner. Australia put in a respectable performance, showing they have enough to compete despite what people thought before the tournament started. Huddersfield’s Aaron Mooy was particularly impressive, his energy and incisive passing a real positive throughout.

Only three points will be adequate for Bert van Marwijk’s team. The Dutch coach has experience and pedigree at the World Cup, taking his home nation to the Final in 2010.

However, this is a totally different challenge. The Socceroos have only ever qualified from the group stage once, in 2006, and not fancied to do so here. There is no reason why Australia cannot go out and beat Denmark though. Australia to win 1-0 is 11/1 with SkyBet. An outside shot could be striker Andrew Nabbort to score first and Australia win 2-0 or 2-1, at 66/1.

The three points already separating the two sides is a large mountain to climb. Denmark beat Peru 1-0 thanks to Yussef Poulsen’s goal but were not the better side. Peru would often blitz forward but lacked the ingeuinity in the final third to create clear-cut opportunities. Christian Eriksen typically provided a moment of quality, sliding a neat pass into Poulsen who slotted past the keeper.

Poulsen to score the game’s only goal in a repeat result in this one is 40/1 with SkyBet. Whilst Eriksen to turn up and net from outside the box is 9/2. The Spurs man has an incredible return of 16 goals in his last 18 international games.

With France left to play, Age Hareide’s men know that a positive result is crucial too. A win, and France getting a draw or better against Peru would secure Denmark’s place in the last 16.

The Danish Dynamite are not expected to replicate the momentous 1992 European Championship winning side. However, there is a bunch of talented and dedicated players in the Denmark ranks that could provide a real shock. Especially with a rock-solid defence.

Denmark vs Australia will be televised live in the UK on ITV 1 with kick-off at 13:00 GMT.