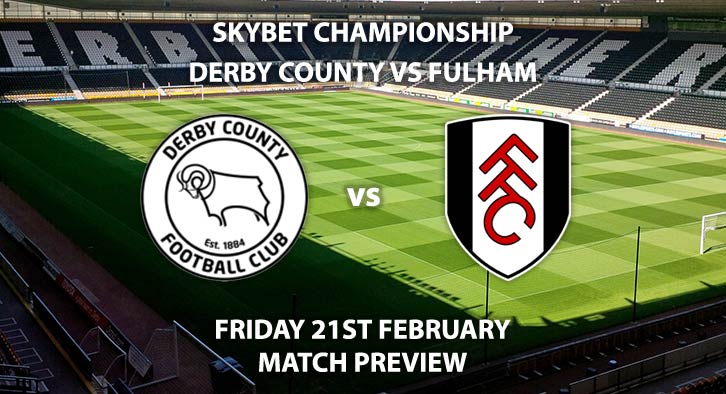 Both sides will be hoping to bounce back from disappointing results in their last encounter. Derby were held to a 1-1 stalemate at home to Huddersfield, meanwhile Fulham were comprehensively beaten 3-0 at home against Barnsley. Following the defeat, Scott Parker’s side missed the chance to get into the automatic promotion places.

Since the turn of the year, Philip Cocu’s Derby County side have been one of the in-form teams in the division, losing only twice in 2020. Last weekend’s draw with Huddersfield means it’s now two without a win for the Rams, but before that they had lost only once in their last ten matches in all competitions.

Fulham on the other hand are doing everything they can to gain promotion back to the Premier League, at the first attempt. The Cottager’s defeat to Barnsley last time round was their only their second in the league this year, and ended a run of six matches unbeaten.

These two sides last met at the end of November, and Fulham were convincing 3-0 winners at Craven Cottage. Fulham have the better recent record ahead of this clash, and have won three of the last four meetings. Derby’s last win in this fixture came in May 2018.

Tom Lawrence has scored two goals in his last three appearances and is priced at 14/5 on SkyBet to score anytime on Friday night.

Fulham are unbeaten in their last five away fixtures in the Championship, and are yet to lose away from home this year. SkyBet are offering odds of an away win at 7/5.

The referee for this clash is Darren Bond. Bond has been one of the more relaxed officials in the Championship this season, and has averaged almost four yellow cards per game. For this fixture, I would recommend a minimum of 30+ booking points.

Fulham vs Derby County will be televised live in the UK on Sky Sports Football HD with kick off at 19:45 GMT.