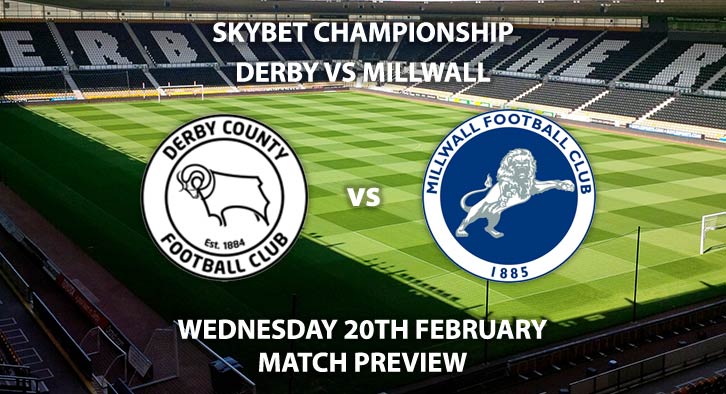 Derby County vs Millwall: Derby County will be looking to refocus their attention on the Championship and move back into the top six with a win over struggling Millwall.

The Rams were knocked out of the FA Cup at the weekend as they went down 2-0 to Brighton and Hove Albion. That result allows Frank Lampard’s side to focus on their dwindling promotion campaign. Derby sit seventh in the table, two points behind sixth-placed Bristol City. If they were to win on Wednesday night it would take them level on points with Middlesbrough, with the same numbers of games played. In the league, they’ve won just three of their last ten games, although each of those wins came at Pride Park. It’s that home from that has been the bedrock of their promotion push – they’ve only lost twice on their own patch this season. Derby are fifth overall in the Championship home form table, which they’ll have to maintain to secure a place in the top six.

Millwall were also in FA Cup action and sealed a place in the last eight thanks to a 1-0 win over AFC Wimbledon. The Lions will take on Brighton for a place in the semi-final. In the league, Millwall are just two points above the relegation zone. Neil Harris’ side have, however, played two games less than Reading and Rotherham, who are directly below them. They have won just three of their last 16 games in the Championship, which is a major concern. On the road, they’re without a win since January 1st, which was their only away win this season, away at Ipswich. That puts them fourth bottom in the away table, having taken just seven points from 15 games.

James Linington is the referee for this fixture. The Englishman has officiated 10 second-tier matches this season. In that time, he has accumulated an average booking points total of 32. Therefore, I would advise a maximum of 50+ total points for this fixture.

The respective records of these two sides should make this game relatively straight forwards. Derby are very good at home and Millwall are poor away. Therefore, I’m backing the rams to get all three points.

Derby Country vs Millwall will be televised live in the UK on Sky Sports Football with kick-off at 19:45 GMT.

Odds and markets last updated on Wednesday 19th February 2018 @18:00 GMT. Keep checking back to see if there’s any updates to markets – the time stamp in the previous sentence for when we update tips on this page will be updated.