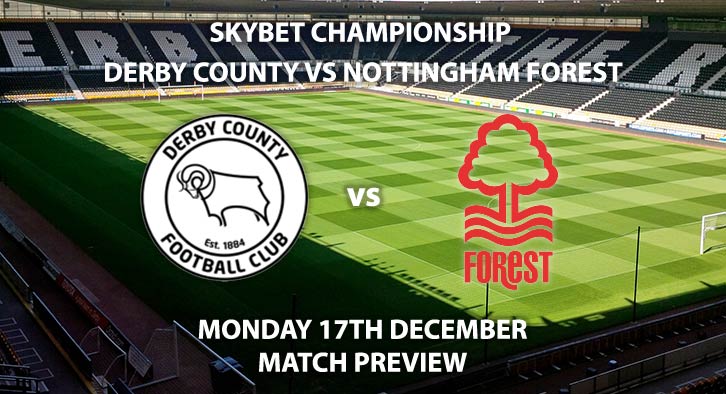 Derby vs Forest: Derby County take on their nearest rivals Nottingham Forest in the East Midlands derby, with both sides desperate for three points to aid their promotion push.

The Rams have won their last two matches and defeated Wigan Athletic last time out 1-0. Jack Marriott’s eighth of the campaign earned Frank Lampard’s men all three points. The former Peterborough striker almost signed for Forest in the summer but instead made the move to Pride Park. He has scored eight in his last ten games for Derby, having made a slow start to life in the Midlands. Derby currently sit in fifth in the table but three points would take them up to third and only four points behind the top two. With only six points separating third and eighth, the play-off race couldn’t be tighter. Derby’s home form has been impressive this season – they’ve only lost twice, to Leeds and Aston Villa. That could prove vital come the end of the season as they bid to reach the top flight.

Forest surrendered their seven games unbeaten run last weekend after surprisingly losing 1-0 to Preston at home. That result leaves Aitor Karanka’s side in seventh, two points off the top six. As a result, this means a win would take them into the play-offs and above their hosts, on goal difference. Lewis Grabban has been their main man this campaign, after signing in the summer from Bournemouth. He has 15 goals in 22 appearances this season, including 11 goals in his last 11 games. That makes him the Championship’s most prolific frontman, one ahead of Brentford’s Neil Maupay. Forest also have a good defensive record. In their last ten games, they have kept seven clean sheets, which is a fantastic return.

Keith Stroud is the referee for this game. The Englishman has taken charge of seven second-tier games this season. In that time, he has accumulated an average booking points total of 30. Therefore, I would advise a maximum of 60+ total points for this derby fixture.

This is a tough game to call. Anything can happen in a derby game and both are these sides are enjoying their best for years in the league. Given Derby’s home form, I think they may shade this game but it will be a tight affair.

Derby County vs Nottingham Forest will be televised live in the UK on Sky Sports Football with kick-off at 19:45 GMT.