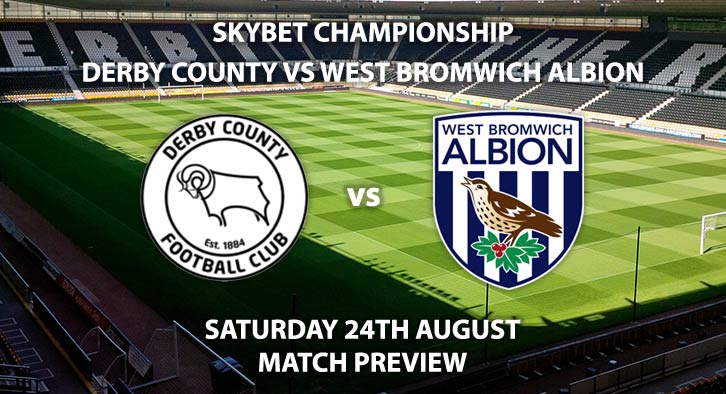 The Rams come into Saturday’s encounter without a win in their last three Championship games following the 2-1 home defeat to Bristol City in midweek. Philip Cocu’s side have failed to register a win in the league since their opening day victory over Huddersfield.

Meanwhile Saturday’s opponents West Brom have shown consistency with their league form, and are unbeaten in their opening four Championship fixtures, with two wins, and two draws.

Both sides entered the 2019/20 season under new management. Dutchman Philip Cocu took over from Frank Lampard as the latter headed to the Premier League with Chelsea, and West Brom recruited ex-Premier League boss Slaven Bilic, who stepped into the void left by James Shannon’s departure in June.

In the combined eight league fixtures played this season between the two sides (four apiece), BTTS has landed in 7/8 fixtures, and I am predicting a similar outcome at the end of proceedings come Saturday lunchtime. SkyBet offer odds of BTTS at 8/13, with a price boost of Derby to win and BTTS at 4/1.

Derby completed a league double over Saturday’s opponents last season, winning 4-1 at The Hawthorns before running out 3-1 winners at home on the final day. Martyn Waghorn scored first in the last meeting between the two, Waghorn to score first this time round is priced at 4/1 on SkyBet.

The referee for this weekend’s clash is Gavin Ward. The Surrey based official took charge of 25 Championship fixtures last season, administering 80 yellow cards, and 7 red cards in the process. Ward to issue a red card this weekend is priced at 7/2 on SkyBet.

Both sides will be looking to return to winning way this weekend after failing to do so in midweek, however I am predicting a stalemate come Saturday afternoon. Despite that, I do feel there will be goals, considering both teams have been no strangers to finding the back of the net so far this season. I would suggest over 2.5 goals.

Derby County vs West Bromwich Albion will be shown live in the UK on Sky Sports Football HD, with kick-off at 12:30 BST.