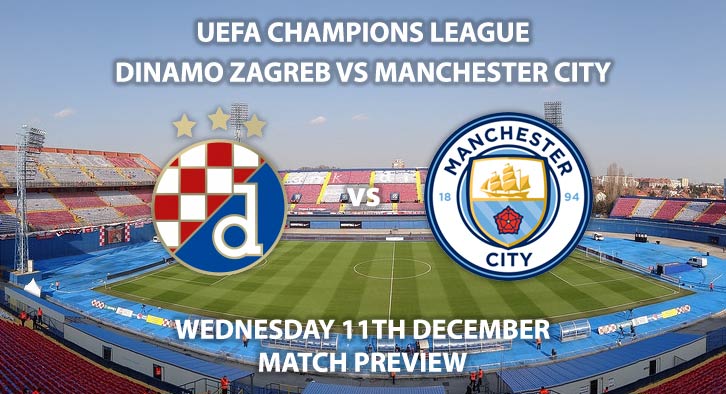 The hosts still have it all to play for with themselves, Shakhtar Donetsk and Atalanta all still able to take second spot in the group. Meanwhile, it is likely that City won’t feature their strongest side in Croatia with their Premier League title hunt getting harder after derby defeat on the weekend.

Dinamo Zagreb are priced at 29/10 to win the match by SkyBet with their eyes on the knockout rounds. The Croatians will be happy with their return so far in the group and have a chance to potentially qualify if the other match goes in their favour with a win against City. They have lost just one of their last ten matches in all competitions and attacker Mislav Orsic has been on great form in Europe. He has four goals in the competition and is priced at 5/2 to score anytime.

Manchester City are priced at 4/5 to win the match and finish the group stages in style. Pep Guardiola has been vocal in recent days about the standard of his current squad and whether they can compete at the top – with their grip on Premier League leaders Liverpool loosening. The squad have a point to prove and will want to sign off from their unbeaten group stage run in fashion.

Striker Gabriel Jesus has more responsibility with the recent injury to Sergio Aguero and will likely start on Wednesday. The Brazilian will get chances and is price boosted at 9/2 to score first.

The referee for this match will be Carlos del Cerro Grande. In their previous meeting earlier in Group C, there were just 30 booking points. This time around, with everything on the line for the hosts, it could turn into a feisty encounter.

– Even if the visitors field a weaker side, they still will have so much quality on the pitch with a point to prove.