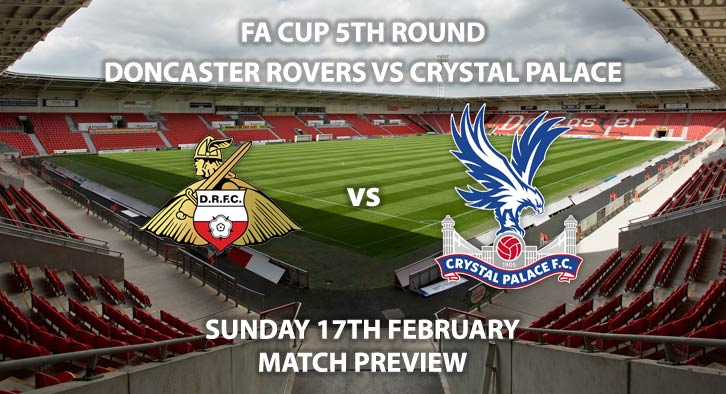 We have a classic FA Cup tie on our hands as Doncaster Rovers will host Premier League Crystal Palace in a fifth-round tie.

The hosts saw off Oldham Athletic in the last round with a penalty in the 90thminute the decider in a 2-1 victory. Meanwhile, Palace shocked many as they beat Tottenham in a comprehensive 2-0 victory away from home.

Doncaster are high odds for this match as SkyBet have priced them at 9/2 to win the match. Doncaster face their proper first test in this competition at home against Premier League opposition. However, recent form will have them high on confidence as they are unbeaten in 5 matches in all competitions – winning three of them. John Marquis in attack has been a joy to watch this season and has taken League One by storm with 18 goals to his name. He is 21/10 to score anytime.

Benjamin White scored the deciding goal from the spot in their last round win. He is oprice boosted at a huge 22/1 to score first.

The visitors are favourites for this fifth-round match-up and are priced at 3/5 to be victorious. The Premier League outfit enter the match unbeaten in four matches however still have to worry about the relegation battle. Their last round match saw them beat Spurs 2-0. Since that match they have managed to coup Michy Batshuayi on loan – a great acquisition. The striker is reportedly expected to make his first start for the club on Sunday and is 8/5 to score anytime.

Although it has been a few seasons, Palace’s record against Doncaster does not make for pretty reading. They have failed to beat them in last three encounters, drawing twice. They are 9/4 to win and for both teams to score.

The referee for this match will be the ever-flamboyant Mike Dean. Dean is a renowned no-nonsense referee and has produced the most booking points this season. He has an average of 50.4 booking points from his 13 top flight matches.

The match will be televised on BBC One and kicks off at 16:00.

– The home sides quality should shine through after their last round shock.