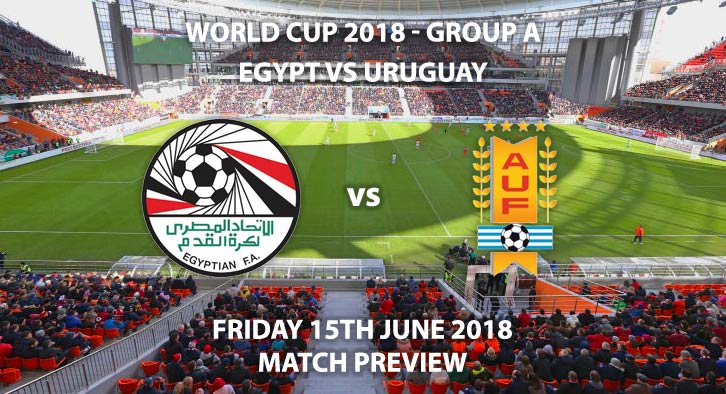 Egypt vs Uruguay – Egypt and Uruguay kick off their 2018 FIFA World Cup campaigns this Friday at the Ekaterinburg Arena.

All eyes will be the Egyptian starting eleven to see if Liverpool forward Mohammed Salah will recover from his shoulder injury he sustained in the Champions League final.

Meanwhile, Uruguay will be relying heavily on their attacking firepower. Barcelona striker Luis Suarez and Paris Saint Germain goal scorer Edinson Cavani are crucial for their nation if they are to open their campaign with three points.

Both countries are in Group A and are joined by Saudi Arabia and host nation Russia in the group stages.

Egypt have not impressed in their warm-up matches, with the absence of Salah a contributing factor. Draws with Kuwait and Columbia before a 3-0 loss to Belgium have not filled their fans with much optimism. The bookmakers are also not optimistic. SkyBet are offering 11/2 for them to win Group A and 11/8 for them to reach the knockout stages.

They have scored only two goals in their five matches in 2018. SkyBet are giving odds of 11/10 for them to find the back of the net. If Mo Salah does reach fitness, these odds are worth backing. However, they are heavy underdogs for this clash with 6/1 odds to overcome their South American opponents.

The favourites, with odds of 8/13, are top of the bookmakers list to win the group. Uruguay finished second in the South American qualifiers above Argentina and recently saw cup success at the China Cup in March this year. They are a well-oiled machine who often line up in a classic 4-4-2 formation and will assure that their two superstar strikers are provided with plenty of service to utilise their strength and power.

Uruguay only fit in one warm-up match where they made lightwork of Uzbekistan in a 3-0 victory. Suarez was able to convert from the spot to boost his confidence. Despite their lack of preparation, SkyBet are offering 8/11 for them to win Group A and very low odds of 1/6 to reach the knockouts. Also, both of their aforementioned strikers are priced at 3/1 each to be the top scorer in the Group.

Egypt vs Uruguay will be televised live in the UK on BBC 1 with kick-off at 13:00 GMT.