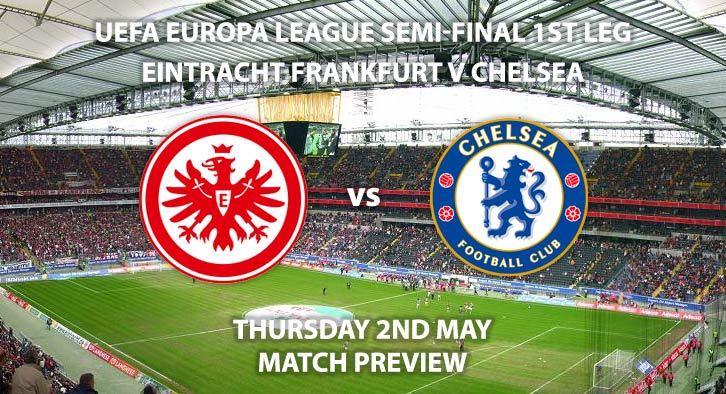 Frankfurt vs Chelsea: Chelsea make the short trip to Germany as they face this season’s surprise package, Frankfurt, looking to claim victory in the first leg of their UEFA Champions League semi-final.

The Blues head across the border in high spirits after their 1-1 draw with Manchester United at the weekend. Despite going behind, Marcos Alonso’ quick thinking after David de Gea’s mistakes ensured that Maurizio Sarri’s side stayed in the hunt for the top four. Chelsea hold a two-point lead on their rivals Arsenal and three on United, with only two games to play. With the Gunners falling to a third-straight defeat at Leicester City, the initiative is very much in the Blues’ hands. Although they have a great chance of reaching the Champions League through the Premier League, the chance of another piece of silverware is potentially only three games away.

Frankfurt defeated Benfica 2-0 in their last European encounter, to send them through on away goals. Adi Hütter’s side have really shone this season and sit fourth in the Bundesliga, with a three-point lead over fifth. With only three games left, they should seal a Champions League spot for next season too, regardless of their efforts in this competition. One of this season’s hottest marksman, Luka Jovic, is their biggest dangerman. The Serbian forward has 17 goals in 29 league games this season and a whopping eight goals in 12 Europa League matches. If rumours are true, there is a good chance Frankfurt’s star man could line up for Thursday’s visitors, or for a host of other major European powerhouses.

Carlos del Cerro Grande is the referee for this fixture. The German has officiated 8 La Liga matches this season. In that time, he has accumulated an average total of 6 cards per game. Therefore, I would advise a maximum of 60+ total booking points for this fixture.

Frankfurt will be wary of committing too much forward, even though they are at home, as they will feel confident of scoring at Stamford Bridge. Chelsea, themselves, are hardly prolific and, as a result, I can see this being a tight, nervy first leg.

Eintracht Frankfurt vs Chelsea will be televised live int the UK on BT Sport 3 HD and kicks off at 20:00.

Odds and markets last updated on Thursday 2nd May 2019 @18:21 GMT. Keep checking back to see if there’s any updates to markets – the time stamp in the previous sentence for when we update tips on this page will be updated.

Remember to keep visiting the tips and preview area for further updates and betting previews around tomorrow’s Premier League game between Everton vs Burnley.