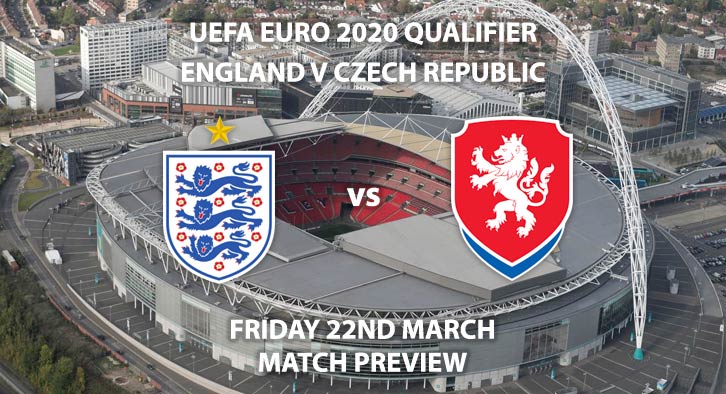 England vs Czech Republic: England will be hoping to kick-off their EURO2020 qualifying campaign in style when they host the Czech Republic at Wembley on Friday night.

Gareth Southgate’s side will be hoping for the perfect start at Wembley, after their heroics at last year’s World Cup. England are without a few key names in Jordan Henderson, Jesse Lingard and John Stones. However, this may offer a good opportunity for some of the new, emerging faces to make their mark in a Three Lions shirt. Marcus Rashford missed training on Thursday, which could open the door for Jadon Sancho to make his first England start. The hot winger has been in scintillating form for Borussia Dortmund, with nine goals already this season. Similarly, Declan Rice could make his first appearance as England’s midfield sitter, or even at centre-back with Stones absent.

Raheem Sterling will be hoping to continue his fine form in a three-pronged attack. The City winger’s 21 goals have made him a key candidate for the ‘PFA player of the year’ award. He’s just behind Virgil van Dijk in the bookies’ betting odds. The last time England played at Wembley, they topped their UEFA Nations League group, battling from behind to beat Croatia. They also boasted an unbeaten qualifying round for the World Cup in Russia and will be hoping to emulate that in the EUROS.

The Czech Republic have won four of their last six games in all competitions, including a 5-1 thrashing of World Cup quarter-finalist Russia. They beat Slovakia, Poland and Ukraine, all by a 1-0 margin, in their UEFA Nations League group, which shows they are no mugs. They’re currently ranked 44th in the world after years of underachieving, but with a new wave of talent on its way through, the future looks bright. ‘Keeper Tomas Vaclik, Sevilla’s number one, will have to be on form to keep the Three Lions at bay, whilst Roma’s Patrik Schick is their dangerman up front. Burnley forward Matej Vydra could also play a part, although probably off the bench.

Artur Dias is the referee for this game. The Portuguese official has taken charge of several Champions League and Europa League games, including Real Madrid, PSG and Villarreal. In his last 82 matches, he has averaged 3.04 cards per game. Therefore, I would recommend a maximum of 50+ booking points for this game.

The Czech Republic are no slouches, but this should be a comfortable win for England, especially if they can get an early goal. The visitors don’t carry a huge goal threat, so I’m backing Southgate’s men to win to nil.

England vs Czech Republic will be televised live in the UK on ITV 1 with kick off at 19:45 GMT.