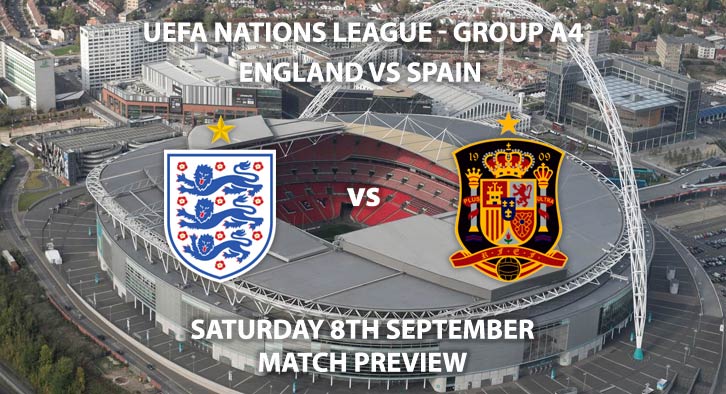 England vs Spain: England take on Spain in the first match of their UEFA Nations League group in their first match since their World Cup exploits.

Gareth Southgate’s side welcome Spain to Wembley, having unusually outperformed their Spanish counterparts at the most recent major tournament. With that in mind, Southgate has made five changes to his side with Alex McCarthy, Joe Gomez, James Tarkowski, Luke Shaw and Adam Lallana all included in the original squad. Lallana, however, will miss both games through injury, in addition to Raheem Sterling, who is also injured. The major news was Jamie Vardy’s decision to retire from international football, whilst Gary Cahill and Ashley Young’s time in a Three Lions jersey looks all but over.

Southgate has always been an advocate of building for the future, so replacing Cahill with Tarkowski and Young with his Manchester United teammate Shaw makes sense. Gomez has also made a fine start to the new season, and probably would have featured in Russia had he not picked up an injury which ruled him out. Given Gomez’s impressive form, it’ll be interesting to see if he’ll slot into the right-centre-back role, which Kyle Walker filled last summer. That could mean Walker, or more likely, Kieran Trippier missing out, despite being one of England’s brightest players.

Luis Enrique has taken over a much-changed Spain squad, with Gerard Pique, David Silva and Andreas Iniesta all retiring after their penalty shoot-out defeat to Russia. The former Barcelona boss has left out Jordi Alba and Koke, but included Jose Gaya, Paul Lopez and Dani Ceballos, who are all uncapped. Diego Costa will miss the match for personal reasons, with Alvaro Morata expected to lead the line in his absence. England will need to watch out for Isco, who has made a great start to the season for Real Madrid, having starred in Russia last summer.

Danny Makkelie is the referee for this game. The Dutchman plies his trade in the Eredivisie and has officiated three games this season, accumulating an average of 1.33 cards per match. Therefore, I would advise a maximum of 30+ total booking points for this game.

Spain are a team in transition; they have a new manager and a lot of new players. They are, however, an incredibly talented group, with the capabilities of beating any team on their day. England will look to hit them on the counter-attack, using the pace of Marcus Rashford and Jesse Lingard.

Although it is hard to gauge just how competitive this match will be, I think Southgate will be desperate for a strong performance – therefore, I’m going to plump for a score draw.

England vs Spain will be televised live in the UK on Sky Sports Football with kick off at 19:45 GMT.