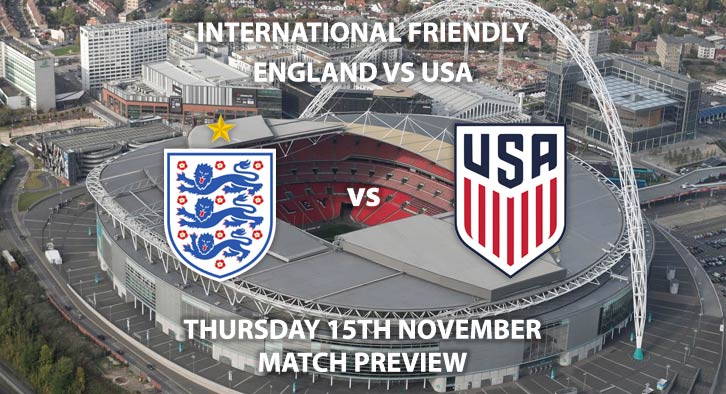 England vs USA: Wayne Rooney will make his final England appearance from the bench when Gareth Southgate’s side host the USA at Wembley for an international friendly.

England’s record all-time scorer will make his final Three Lions bow on Thursday, but will not start or captain the side. Rooney’s inclusion has been criticised by some former players, as Peter Shilton accused the FA of ‘cheapening the shirt’. This game offers a chance for fans to pay their respects to an England legend, whilst also raising money for a worthy charity. He isn’t taking the place of any young player, nor will his appearance change any records in respect to England caps. It is Rooney’s first cap since 11th November, just over two years ago.

Jadon Sancho is expected to be given his first England start, after impressing in last month’s double-header against Spain and Croatia. The young winger has starred this season for Dortmund and holds the most assists in the Bundesliga. Bournemouth striker Callum Wilson and the recalled Michael Keane are also expected to play some role in the match, although it’s unknown whether that will also be from the start. England fans will also be hoping to see Raheem Sterling replicate his scintillating form for his country. Sterling has been in terrific form once again for Manchester City, and supporters will be hoping to finally see the translate in the Three Lions shirt.

The USA travel to the capital looking to put their World Cup disappointments behind them. Manager Dave Sarachan is in the process of rebuilding his side, after their humiliating defeat to Trinidad and Tobago which saw them fail to qualify for Russia 2018. There are still some familiar faces in the USA squad, with former Aston Villa ‘keeper Brad Guzan, on-loan Tottenham defender Cameron Carter-Vickers and DeAndre Yedlin have all been included for this game. Their biggest danger man is Dortmund winger Christian Pullisic. The speedy winger will provide the USA’s biggest threat down the flanks as he looks to turn the game in his side’s favour.

Jesus Gil Manzano is the referee for this game. The Spaniard has taken charge of six La Liga fixtures this season, accumulating an average cards points total of 6.17. Therefore, I would recommend a maximum of 60+ total points for this friendly fixture.

England should run out comfortable winners, in all honesty. Whilst Southgate may tinker with his side to try different combinations, they should have enough to come away with the win.

England vs USA will be televised live on Sky Sports Main Event with kick off at 22:00.