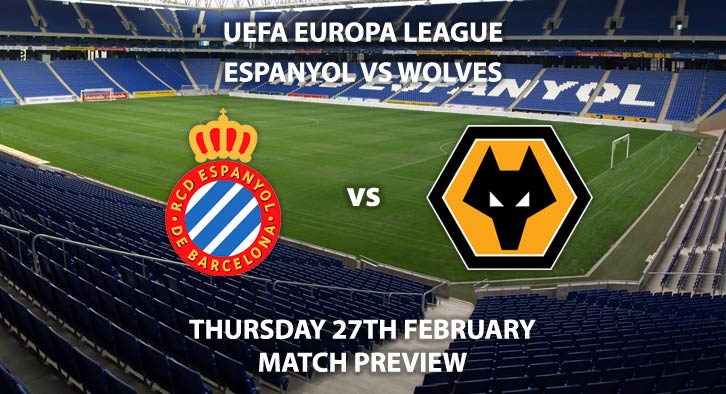 Wolves will travel to Espanyol with one foot in the next round in their UEFA Europa League tie.

The Spanish hosts have a mountain to climb after being on the end of a 4-0 demolition at the hands of Nuno Santo Espirito’s side. A Diogo Jota hat-trick and a moment of magic from Ruben Neves sealed an unforgettable night a Molineux for the men in gold. However, they must stay focused in Spain to get the job done.

Espanyol are priced at 7/4 to win the match by SkyBet and show some fight after a dreadful first leg. The Spanish outfit are struggling to find a win at the moment, with just one victory from seven matches across all competitions. They boast the same poor record from their home matches, and they are hosting a Wolves side firing on all cylinders.

Going forward, they are struggling for goals, hence why they are rock bottom of La Liga. Attacker Wu Lei will fill in for the injured Raul De Tomas and is priced at 3/1 to score anytime.

Wolves are priced at 13/8 to win the match and end this two-legged tie in some style. The Midlands based club are in red hot form heading into this match. After their 4-0 demolition job of Espanyol, they battered Norwich 3-0 with Diogo Jota grabbing two more goals.

The Portuguese forward has scored six Europa League goals this season and is priced at 16/5 to score anytime.

The referee for this match will be Italian Marco Guida. In the first leg of this tie, there were 40 booking points banished at Molineux.

Espanyol vs Wolves will be televised on BT Sport 1 HD and kicks off at 17:55.

– With the tie almost over, Wolves will show their quality and Espanyol will fight for some pride.